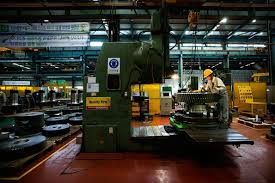 Smaller industrial units are in danger of missing out on the next annual gas auctions, set for October 15, and the lower energy costs entailed, as a result of pending issues concerning the revision of terms that essentially exclude non-eligible industrial units located in areas not being serviced by the country’s gas supply companies.

Collectively, the number of firms excluded amounts to what is not an insignificant part of Greece’s industrial sector. These include numerous small-scale industrial plants based in the Inofyta region north of Athens, except for ELVAL, the Hellenic Aluminium Industry, which is listed among the eligible participants. Should the required revisions not be carried out by authorities, numerous firms will miss the approaching gas auctions and consequently be deprived of being supplied natural gas at relatively satisfactory price levels, which would certainly be lower than those offered by current market supply prices.

Auctions for natural gas promise prices levels that are between 10 and 15 euro per MW h lower than those offered by current market prices. For some smaller-scale industries, this adds up to an annual cost that can exceed one million euro.

As has been regularly reported, the industrial sector is anticipating the abolishment of current regulations that exclude non-eligible production units, through a revision to legislation established to liberalize the retail energy market. Certain sector officials argue that the establishment of a separate bill, exclusively dealing with the matter, would have provided a swifter revision path.

Failure to take action would greatly increase the likelihood of a new energy cost rise for a significant number of smaller industries, ironically, amid the government’s wider effort for an economic recovery and its intended support for industrial production.