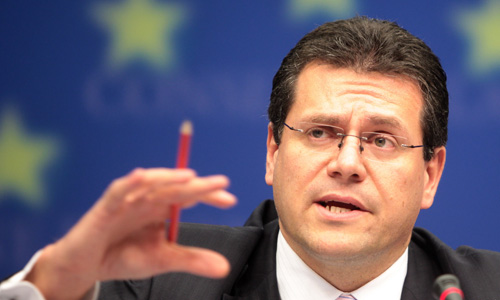 Maros Sefcovic, the European Commission vice president responsible for Energy Union, currently on an EU tour for quick assessments of energy union progress being made by member states, is scheduled to visit Athens on Thursday.

The official’s visit to Greece carries an additional dimension as the country’s bailout-related reforms, including those for the energy sector, are currently being reviewed.

The European Commission’s most recent report on Greek energy union, published last November, made note of a series of concerns, including the main power utility PPC’s continued market dominance as well as the lack of fair conditions in the market necessary to propel competition. The report reminded of the Greek government’s agreement to adopt measures that would reduce PPC’s market share by 25 percent in the short term and 50 percent by 2020.

It also underlined various problems faced by RAE, Regulatory Authority for Energy, such as the lack of staff and funds at the independent body, expected to play a key role in monitoring the Greek electricity market’s path towards full liberalization.

The European Commission report also commented on the dominant market position of DEPA, the Public Gas Corporation, admitting that some progress has been made despite the fact that regional retail markets remain monopolies. Latest legislation is expected to finalize this market’s liberalization by 2018. The increased presence of LNG in the Greek market and the TAP pipeline’s development are also expected to further boost competition,the report said.

Elevated prices in Greece’s wholesale electricity and gas markets, high taxation in the energy sector, as well as the greater effort needed to achieve renewable energy source (RES) targets for 2020, were also pointed out. The current lack of stability and transparency concerning the upcoming RES support plan threaten the prospective growth of the RES sector, which is crucial for energy security and economic growth, the report noted.

It will be interesting to see what position Sefcovic adopts on taxation levels in Greece’s energy sector, currently well above EU average figures and greatly increasing energy costs.