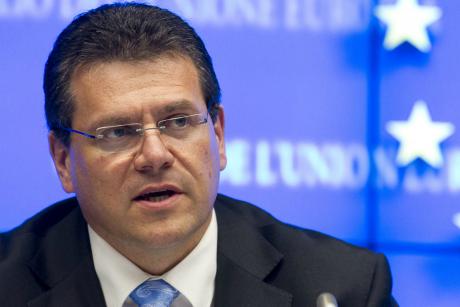 Greece promises to play a crucial role in European natural gas supply as a result of current regional developments linked to the natural gas sector, Maros Sefcovic, the European Commission’s vice president, has pointed out in an interview with EurActiv.com.

Sefcovic, who said he is scheduled to visit Greece on March 10 as part of an Energy Union tour, pointed out that the country is set to play a vital gas transit role.

“The Southern Gas Corridor should bring the new Caspian gas to Europe before 2020, and this pipeline goes through Greek territory. We see very interesting developments in the Eastern Mediterranean, with gas fields discovered around Cyprus, close to Israel, and close to Egypt. Europe could become a destination of this gas, and again, Greece would play a very important role,” Sefcovic was quoted as telling EurActiv.com.

He added that details on the IGB interconnector between Bulgaria and Greece are currently being worked on amid a very positive climate.

“That would be a very important gateway for the new supplies which will be coming to Europe from the Caspian, but also from the Mediterranean, for shipping them north to Bulgaria and the western Balkan countries. These are, of course, projects we will discuss once in Greece,” Sefcovic noted. He added that, based on updates from Greece’s energy minister Panos Skourletis, the IGB will be built on time and Greece will be able to profit from its geographical location and become a crucial transit country for gas entering from at least two directions.

Asked to comment on the continued dominance of main power utility PPC in Greece’s electricity market, still a monopoly, according to the interviewer, Sefcovic responded: “I’m sure the current Greek government has so many issues to deal with. They have to focus based on their priorities.”