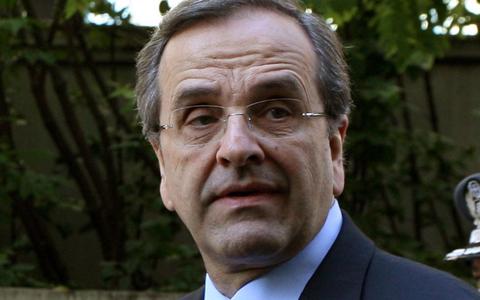 Greek Prime Minister Antonis Samaras is broadening his support in parliament with less than a week to go before his first attempt to elect a new president and avoid an early election in Europe’s most indebted state.

Eight independent lawmakers said in interviews this week they are ready to back Samaras’s nominee, Stavros Dimas. That leaves the premier to find another 17 votes from the 300-seat chamber to reach the supermajority he needs to elect a new head of state. In the first two rounds of voting beginning on Dec. 17 the threshold is 200 votes before it drops to 180 on Dec. 29.

“I don’t want snap elections to take place because they will destroy the economy,” Panagiotis Melas, an independent parliamentarian, said in an interview yesterday.

Failure to rally enough support for Dimas at the third and final ballot would force Samaras to dissolve parliament and opinion polls suggest the resulting election would be won by the anti-austerity Syriza party. Samaras’s decision to bring forward the presidential vote sparked a rout in Greek financial markets this week although the prime minister says the move is designed to alleviate political uncertainty.

“The announcement of a snap presidential vote by the Greek government has brought back uncertainty and fear within and outside Greece,” said Andreas Antoniades, senior lecturer in global political economy at the University of Sussex. Still, “it seems to be step in the right direction. A prolonged period of a parliament hostage to the issue of the presidential election would rather exacerbate political uncertainty.”

Samaras’s search for votes is focused on three groups: 24 independent lawmakers, 12 members of Independent Greeks, a group which split from the prime minister’s party in 2012, and 10 members of Democratic Left.

Independent lawmakers George Ntavris, Grigoris Psarianos and Spyros Lykoudis joined Melas in confirming they’ll back Samara’s candidate in interviews. Another four said they’ll probably support Dimas, although they asked not to be identified because their decision is not yet final. Four others weren’t available for comment when contacted by Bloomberg News.

On the other side of the ledger, the leaders of Independent Greeks and Democratic Left have committed to voting against Dimas, but both are struggling to maintain control over their lawmakers as their support among voters declines. Twelve independents have said they probably won’t back the nominee in interviews with the Greek media.

“They have asked for an extension of the bailout and brought forward the presidential election in order to trap the next government,” Chryssoula Giataganna, an independent lawmaker, said in an interview. “I will say no to this blackmail.”