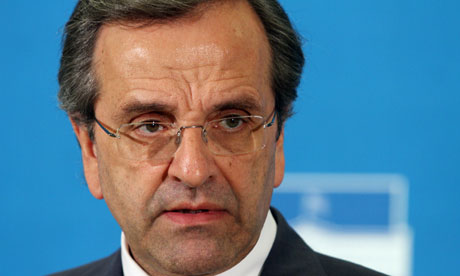 The premier briefly met with locals at the site΄s refreshment facilities and urged them to “be patient for a few days.”

Samaras then visited the Kasta Tomb and was guided through the excavation site by the archaeologist in charge Katerina Peristeri who briefed him on the findings.

“It is clear that we stand before an extremely important finding,” he said adding that the land of Macedonia continues revealing unique treasures that “weave the unique mosaic or our Greek history.”

“This is a monument with unique features: A surrounding peribolos of 497 meters, almost a perfect circle carved in Thassos marble. The Lion of Amphipolis over 5 meters high, 5.20 meters; let΄s imagine it as being on the top of the tomb,” he said while also referring to the wide path that leads to the tomb entrance and the two Sphinxes that seem to be guarding it.

“I believe all these findings have allowed archaeologist Katerina Peristeri to be optimistic that this is a unique burial monument, which –as she said- dates between 325 and 300 BC. Regarding the key question, the excavation will reveal the identity of the deceased. The excavation will continue at a pace dictated by the finding as well as the scientific ethics,” he added congratulating Peristeri and her partners.

Amphipolis newly elected mayor Constantinos Melitos told ANA-MPA that “the premier’s visit means the excavation is expected to reveal something significant” and added that the “area and the whole of Greece will become known around the world.”