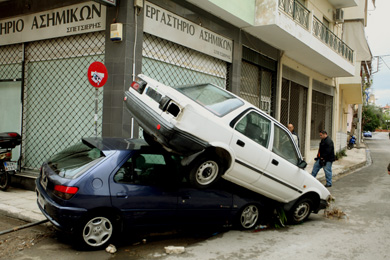 Authorities began on Saturday assessing the damage done by flash floods in various parts of Athens a day earlier, with Prime Minister Antonis Samaras pledging that all those affected would be compensated.

A sudden bout of heavy showers on Friday, believed to have been caused by the remnants of Hurricane Gonzalo, led to 14 centimeters of rainfall in around 90 minutes. This led to flooding and damage in Peristeri, Ilion, Perama, Menidi, Aegaleo, Aghioi Anargoiroi, Nikaia, Piraeus and Kamatero. It is estimated that between 250 and 300 cars were swept away by the rain. The fire service was called to pump water out of some 850 homes and businesses.

Samaras went straight to the Civil Protection Authority’s crisis center on Friday night when he returned from a European Union leader’s summit in Brussels to be briefed on the day’s events. He said that the damage assessment should be completed on Monday and that he had instructed the Finance Ministry to release compensation for those who suffered damage.

“I am also expecting authorities to recommend specific improvements that can be made to the anti-flooding infrastructure in the areas affected, where we have seen problems for a long time,” added the premier.

Attica Governor Rena Dourou complained that she was not invited to take part in the crisis meeting on Friday night. The SYRIZA politician accused Samaras of excluding her for political reasons and to score points with his party.