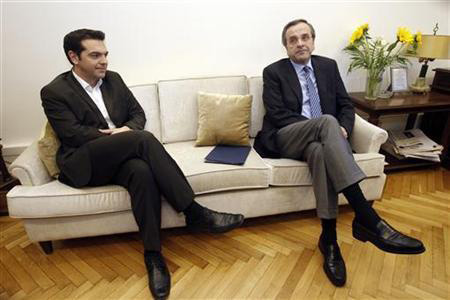 Greece is caught up in a tricky situation – and it is hard to say if or when it will manage to extract itself. One hopes that the damage to the economy and ordinary citizens’ living standards is limited.

Let’s be realistic. In the wake of Friday’s Eurogroup meeting it seems that this government could end up with a slightly better deal than what former Prime Minister Antonis Samaras would have got had he not changed course after the European elections – a lower primary surplus target, but nothing more. Greece’s tough-guy posturing is running up against hard facts: the empty state coffers, and the banks’ and the economy’s total dependence on the European Central Bank. Prime Minister Alexis Tsipras must first carry out 70 percent of the measures included in the bailout agreements and only after Greece’s progress has been evaluated by the “institutions” will the country get lower primary surplus targets and some debt relief.

Is this something Tsipras can achieve? A first problem is the balance of power within ruling SYRIZA. A second is the fact that Tsipras has little faith in privatizations and other reforms that he must respect or introduce. A third problem is that political uncertainty has taken a hefty toll on revenues, mainly because of reluctant foreign investment. But there is no other way for Greece in the eurozone. Talk about a big political agreement that will take into consideration the country’s geopolitical significance and so on are mere pipe dreams.

Some people say that a switch to the drachma or a “parallel currency” may not be such a bad thing after all. Maybe they know more about economics than the rest of us, but let me say this: Our politicians might be better suited to the drachma than the euro, but we certainly do not have politicians with the caliber and professionalism demanded by the historical decision for a return to the drachma. A return to the drachma requires fiscal wizardry and discipline and full reform and regeneration of our productive base.

It’s such a pity we have reached today’s impasse. Samaras kept the country on its feet before giving in to populist forces after the European election. Had he followed Yannis Stournaras’s recipe it’s highly probable he would have got what Tsipras is demanding now. He would have lost the election but led the country to safety. Tsipras, on the other hand, was in a hurry. Had he not been in such a rush to bring down the Samaras government, he would still have won the election, and perhaps with more votes. Samaras would have done the dirty job of passing the tough measures and the country would have overcome the hurdle of high debt repayments in 2015. In other words, had Tsipras waited a few months he would have been able to more or less do as he pleased without putting the country in danger.

Tsipras was hasty, Samaras was too late and our partners and creditors did their best for us to reach this point. Without a national unity government comprising the country’s best, the Greek game will not be saved.