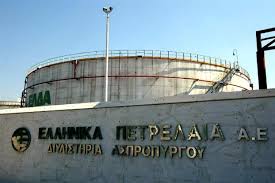 The Greek government will reconsider selling its 35 percent equity stake in Hellenic Petroleum (ELPE) if the general index at the Athens Stock Exchange rises to levels of between 1,000 and 1,200 units.

“It will only make sense to start talking again about the ELPE [equity stake] sale if the Athens Stock Exchange breaks the 1,000 unit barrier and remains stable at that level for one or two months,” commented an authority involved in the country’s privatizations.

Considering the Greek economy’s numerous challenges being confronted, both domestic and foreign, the overall consensus is that the Athens Stock Exchange will remain at levels of between 790 and 850 units for at least another month.

If more positive times prevail, as certain government officials insist, then the sale could proceed at some point within 2015, as long as the climate of political uncertainty, at present the main threat for the Greek market, clears up.

Based on ELPE’s current share price value, the company’s total equity worth amounts to 1.29 billion euros, meaning that a 35 percent stake is worth approximately 450 million euros.

Last July, TAIPED, the State Privatization Fund, pressured to boost trivial privatization revenues, proposed the idea of selling the state’s 35 percent stake in ELPE through the Athens bourse. At the time, conditions were far better with the general index at levels of between 1,000 and 1,250 units. At such levels, ELPE’s total equity worth reached 1.85 billion euros, while a 35 percent stake was worth 647 million euros.

A final decision on the matter will be made by the government in collaboration with the company’s main shareholder Paneuropean Oil, which controls 40.98 percent of ELPE. Paneuropean Oil is a member of the Latsis corporate group.

When the Latsis Group moved in on ELPE through Paneuropean Oil back in 2003, it signed an agreement with the Greek government that secured for the corporate group preferential rights in the event that an additional stake of ELPE is offered for sale by the state. This right remains valid, while the Latsis group also controls ELPE’s management. It all boils down to meaning that TAIPED cannot proceed with a sale of ELPE shares unless the Latsis group offers its consent.