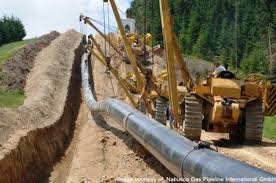 Russia has Greek and other European energy officials thinking about the challenges and prospects of new gas pipeline infrastructure in the continent following the latest sector-related comments made by Russian Prime Minister Dimitry Medvedev, who has essentially stated that Russia will get natural gas to the Greek-Turkish borders, through a revised route and, thereafter, Europe will be responsible for distribution.

The news emerged from a meeting yesterday between Medvedev, the country’s Energy Minister Alexander Novak, and Gazprom CEO Alexey Miller, who discussed plans following the country’s apparent cancellation of the South Stream project. The new thinking envisages a pipeline route towards Turkey.

Novak pointed out Russia’s agreement with Ukraine as a transit state expires in 2019, while noting that Europe will draw its gas supply from the Greek-Turkish border region.

The Russian Energy Minister noted that development on new pipeline infrastructure will neet to commence soon as construction of such projects requires time.

According to Russian news agency Ria Novosti, the European Union has already been informed of Russia’s decision to redirect gas supply to Europe by bypassing Ukraine through a new route dubbed Turkish Stream.

Pundits have already raised a number of observations following Moscow’s latest move, which has caught many sector officials by surprise.

Firstly, Greece has yet to officially position itself on the developments as the country is locked in pre-election mood ahead of this Sunday’s snap elections. Secondly, it remains unclear as to how the Russian plan will impact the TAP (Trans Adriatic Pipeline) project, to carry natural gas from Azerbaijan to Europe. Also, many analysts highly doubt whether Russia will be able to finance such an ambitious project as a result of the economic problems caused by plunging crude oil prices.