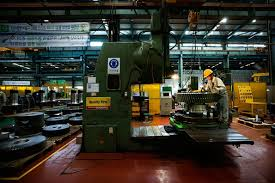 An amendment aiming to offer small-scale industrial plants access to lower-priced gas was resubmitted to Parliament late Friday by the Environment, Energy & Climate Change Minister Yiannis Maniatis after having been withdrawn a day earlier as a result of strong objections from the PASOK party, the coalition’s junior partner.

The party argued that the amendment was rushed in late during Thursday’s Parliamentary session along with two other revisions by other ministries.

The amendment will open up natural gas auctions held by DEPA, the Public Gas Corporation, to industrial plants, regardless of consumption levels. Until now, these gas auctions have been limited to industrial plants consuming over 10 million cubic meters of natural gas on an annual basis, therefore depriving thousands of smaller plants of cheaper gas supply. This condition will no longer apply. The industrial sector has long pushed for its elimination.

However, following conflicting information over the past couple of days, latest reports said tonight’s amendment will offer gas-auction access only to smaller industrial plants located beyond regions covered by EPA gas supply companies, namely the wider Athens area, Thessaloniki, and Thessalia, in the mid-northeast. Smaller plants within these areas will gain access to the gas auctions through an ensuing amendment to be attached to legislation for the natural gas market’s liberalization, it was reported. The legislation will need to be approved by the country’s creditor representatives, or troika, already in Athens for a new round of negotiations. Its details are expected to be announced in October.