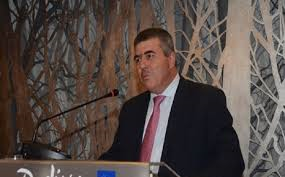 Reinforcing energy security in Greece and the wider region through the development of the IGB pipeline project, to provide a direct link between the national natural gas systems of Greece and Bulgaria, stands as a priority at DEPA, the Public Gas Corporation, its managing director, Spyros Paleogiannis has told a conference in Athens.

“We are creating a new gas gateway through this pipeline,” Paleogiannis noted at the conference, organized by Samaras and Associates, a consulting engineering company.

Paleogiannis noted that DEPA is currently redefining its strategy and business plan, while adding that plans concerning the supply of CNG and LNG gas to eastern Greece and the islands were now being examined and will be actualized over the next few years.

The DEPA chief pointed out that the corporation’s pilot program for the establishment of about fifteen natural gas stations in Athens, Thessaloniki, and other provincial cities around the country was now in full swing. The emergence of these stations will help promote natural gas as a transportation fuel and attract the first mass wave of users, Paleogiannis noted.

“We have been supplying about 600 buses and 150 garbage trucks in the wider Athens area since 2002, and are now entering the car market,” he noted.