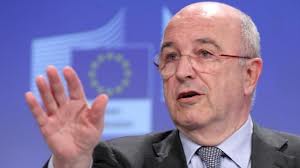 The competition policy head, who was speaking at European Parliament’s Committee on Economic and Monetary Affairs, was responding to a comment from Greek European Parliament member Giorgos Kyrtsos – affiliated with the European People’s Party (EPP) – who, citing a general rise of prices in the market, pondered whether Europe was being held hostage by oligopolies and monopolies. He did not name PPC.

Almunia’s focused response, aimed directly at PPC, comes just days before the end of public consultation procedures organized by RAE, the Regulatory Authority for Energy, on NOME-type auctions. These will, for the first time, offer independent private-sector suppliers access to electricity produced at lignite-fired stations and hydropower plants, in an effort to open up Greece’s electricity market.

New players were currently absent from the market because investment opportunities did not exist, Almunia noted, adding that an economic recovery and heightened competition would open up the market.

Almunia concluded his remarks on the Greek market by noting that a “very important legal decision for Greece was recently made with regards to lignite and electricity, which judged that exclusive access rights for one company is not compatible with competition rules.”