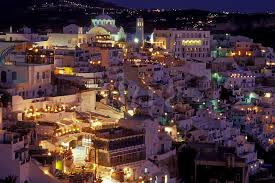 The European Investment Bank (EIB) will finance a project for improved electricity production on eighteen islands in the north and east Aegean, Dodecanese, Cyclades, as well as a cluster of Diapontian Islands off Corfu in western Greece’s Ionian Sea, with an amount of 80 million euros.

“We support investments that improve the economic and living conditions of people, such as the power system’s upgrading on many non-interconnected islands,” Hoyer noted. “This project offers a further step towards safe and uninterrupted power on the Greek islands, following a 65 million-euro agreement we signed in September to finance the link of the main islands of the Cyclades with mainland Greece’s interconnected grid,” he continued, referring to the interconnection of Andros, Naxos, Syros, Tinos, and Mykonos with the mainland, a project expected to be completed in 2016.

EIB vice president Wilhelm Molterer, who also attended the signing ceremony, announced plans for increased technical support to Greece through the JASPERS (Joint Assistance to Support Projects in European Regions) initiative, which is managed by the EIB and co-sponsored by the European Commission and the European Bank for Reconstruction and Development (EBRD).

“Our support to Greece is not limited to granting loans. In addition to financial assistance, the EIB, in recent years, has also provided Greece with technical assistance services in various areas,” remarked Molterer, the EIB vice president.

Zervos, the PPC chief, reminded that the EIB has stood as a main financial partner for PPC since 1963 in various domains, including mining, electricity production, transmission and distribution. The bank’s financial support amid the recession’s extremely unfavorable conditions was of crucial importance for PPC, he stressed.

“The aspiration of a Europe in which residents of all regions, including isolated islands and geographically disadvantaged areas, will have the same rights as residents in all other parts of Europe, is beginning to take shape,” Maniatis stated.