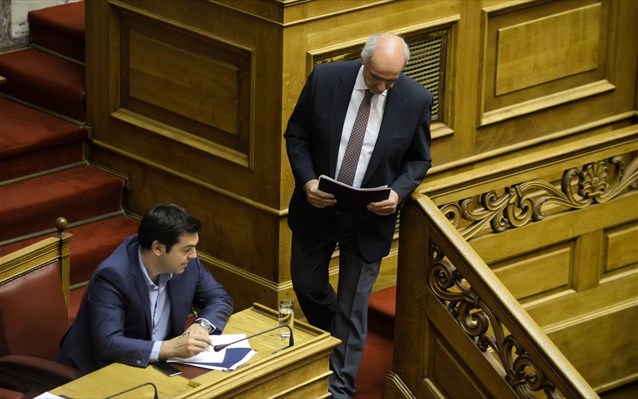 The television debate of Greece’s political party leaders which was broadcasted on public channel ERT ended shortly after midnight on Wednesday. SYRIZA leader Alexis Tsipras admitted that his coalition government wasn’t able to implement part of the pledges he had made before the last elections, but added that the battle to change things will continue.

“It’s clear we didn’t manage to implement part of our pledges, but the fight continues and we hope to succeed in the future,” Tsipras said. He was responding to a journalist’s question on why the Greek people should vote for him again considering he didn’t abolish the unified property tax ENFIA and maintain the tax-free threshold for annual incomes of up to 12,000 euros, as he had promised.
Tsipras said that people know how hard his government fought these past six months to defend the country’s rights in his negotiations with Greece’s lenders. “We were obliged to achieve primary surpluses, but with the negotiation we saved 20 billion euros, we managed to stabilize the economy and at the same time we secured 35 billion euros from the Juncker package,” the leader of SYRIZA noted, while reminding the imminent bank recapitalization.
Asked to comment on the criticism leveled against former Migration minister Tasia Christodoulopoulou who was accused of inertia on the refugee crisis, Tsipras said: “Enough with the hypocrisy and the aimed attacks against the government!” He noted that SYRIZA was the one who established the migration portfolio, while previous government simply used ‘sweeping’ operations in central Athens. He also said he brought the issue to the EU by making joint actions with Italy’s premier Matteo Renzi.

He finally called on voters to end with the past and move forward.

New Democracy leader Vangelis Meimarakis urged Greeks to vote for his party saying it would give him the opportunity to complete the work that was left unfinished from the party’s last term. “We ask for people’s vote to complete what we didn’t have time to complete in the previous term.”
He was responding to a journalist’s question on why Greeks should vote for a party which went back on its pre-electoral pledges in 2012. “It’s true we said a lot of things in 2012. We implemented many of those,” he said and added that New Democracy didn’t have an absolute majority and had to cooperate with PASOK.
Meimarakis said at the end of the day, the people will judge how the country did. “In January the country was doing much better; the special levy was reduced, the tax on oil was reduced, and social security contributions decreased … If we have had the full four-year term our work wouldn’t have been abruptly interrupted and we would have implemented the things we promised.” He also noted that his party brought investments in the country while Tsipras “chased them away”.
Asked about the possibility of forming a coalition government with other parties after the elections, Meimarakis said New Democracy is seeking a government that would have a four-year term to complete its work and said that if people grant him the mandate to govern, he will try to form a coalition government.
Responding on a question on how his party would handle the refugee crisis, he said New Democracy’s position is known and is included in its program and urged the other political leaders to stop promising anything on the issue.
Popular Unity (PU) leader Panagiotis Lafazanis defended his proposal to return to a national currency, saying it would strengthen production, exports and increase liquidity. “The national currency is used in more than 10 countries in the European Union which are not in the Eurozone. And they’re not unhappy. The national currency will improve production, exports, will lower imports and increase liquidity,” he said, responding to a journalist’s question on the negative consequences of a return to a national currency.
“It’s not the best thing to terrorize people. This issue has not been discussed at all in public and it’s the responsibility of the European status quo,” he added and continued “The memorandum is the terror and the disaster. All memorandums are a disaster and there’s no good and bad, left and right, old or new.” Asked whether such a move would be devastating for the lower income-earners, the leader of PU argued that a return to the national currency doesn’t require much study, but simply to print money. “There will be a small devaluation in the beginning but the result will be positive. Ninety-nine percent of the planet uses a national currency,” he said.
Lafazanis also accused Europe for the refugee crisis, saying “the European status quo is responsible for the tragedy we’re witnessing” and that “large funds are needed to tackle the situation.”

Taking his turn, Potami leader Stavros Theodorakis said Greece needs a government that will offer solutions to the country’s problems by reducing the party-state. “The day after the elections, we need a government of 20 ministers who will provide solutions to the country’s problems. We need to reduce the party-state,” he noted. Asked why he supported the new bailout he said that “there are no ideal solutions in politics”, adding “this doesn’t mean we don’t support the unemployed or the small and medium-sized businessmen.”

Continuing on his point, he said his party can reduce public administration in its higher ranks, so as to reinforce it where it needs it most. “The State cannot be a game with boxes for political parties. We need evaluation of the structures too, which New Democracy didn’t do.” Commenting on the tax policy towards businesses that would promote growth, Theodorakis said that his party’s main position is that it should depend on the number of its employees. “The second thing about this country is that it has the potential to export. It is at the center of Europe and it will remain there, so it must export.”
Discussing the refugee crisis, Theodorakis said the situation on the islands is tragic adding that Europe has a responsibility to help and his party would pile pressure on the EU.

Communist Party leader Dimitris Koutsoumbas differentiated his party’s stance towards the European Union to that of Popular Unity’s, arguing that the latter simply wants to exit the Eurozone leaving the monopolies in the hands of the EU. “It’s one thing to take ownership of the wealth produced by socializing the monopolies and following pro-people development and in this road to imitate the exit from the EU and quite another to leave the power to the other monopolies and the EU and simply leave the euro,” he noted.
He said an exit from the Eurozone in the way PU envisions it would mean new harsh measures for the people, adding that PU’s proposals are found in other Eurosceptic parties, like Golden Dawn in Greece, clarifying that he wasn’t drawing any parallels between the two parties. Asked if with the Communist Party’s proposals Greeks will become rich, Koutsoumbas said that the country has very large productive capabilities and an experienced working and scientific personnel, which in a socialized economy and with a unilateral debt cancelation there could be work for everyone and a better future.
Asked on the refugee crisis, he said measures need to be taken to transfer all refugees and migrants to the destination countries, adding that the European Commission should intervene by using charter flights or boats, if needed.

On his side, Independent Greeks (ANEL) leader Panos Kammenos said that some services that concern strategic sectors must remain in the hands of the state while noting that he supports lower taxation as an incentive. “Heavy taxation stops growth … the lower the taxation the more possible it is to increase revenues for the state. We have to provide incentives to bring back bank deposits worth 160 million euros and return the 45 million euros hidden in the chests,” he responded to a question on how he would promote growth. On the same issue, he said the country needs a stable tax system to help investments and proposed that the islands be turned into tax-free zones.
Asked on why his party signed the bailout deal, he said ANEL had to vote it to save Greece’s membership in the Eurozone but added that the party didn’t suffer losses because of this decision. “The Independent Greeks are the only party that didn’t suffer losses from signing the deal, although it was a difficult choice. Otherwise, the country would exit from the European Union and the banks would have been destroyed.” Kammenos noted that the former government may have not managed to abolish the unified property tax ENFIA, but it did manage to avoid the deal being subjected to the English law.
Answering questions on the refugee crisis, he said that adding ships to relieve the pressure on the islands was the government’s proposal. “When we were saying to abolish Dublin II, they made fun of us. Now [German Chancellor Angela] Merkel proposes it.” Discussing possible cooperation after the election, he said his party proved that national conciliation is possible by cooperating very well with SYRIZA.

PASOK leader Fofi Gennimata said her party has the experience and knowledge to negotiate with Greece’s lenders and voters should give it a chance to be the catalyst in the upcoming elections. “People can compare the different parties now. We ask to give us the power to be the catalyst in developments,” Gennimata responded to a question on why should people vote for her party.

“We were led to the third and worst. If there was a Golden Raspberry Award, it would be won by Tsipras who pushed the country towards the Grexit. Our differences are visible. We have the experience and knowledge to negotiate after SYRIZA’s 7-month negotiation,” she added.

Asked to comment on accusations that PASOK didn’t close the negotiation to avoid the political cost and pass the hot potato to SYRIZA, Gennimata said: “PASOK has heard many accusations. We were called traitors. Nobody can accuse us of placing party interest over country interest like the parties that lied, were populists and brought a memorandum of 11 billion euros for New Democracy and 14 bilion for SYRIZA.”

Asked on the refugee crisis, the leader of PASOK said the solution is the drastic change of EU’s policy and an immediate initiative by the government to protect the Greek islands. She added that refugees must be treated with respect to human rights.