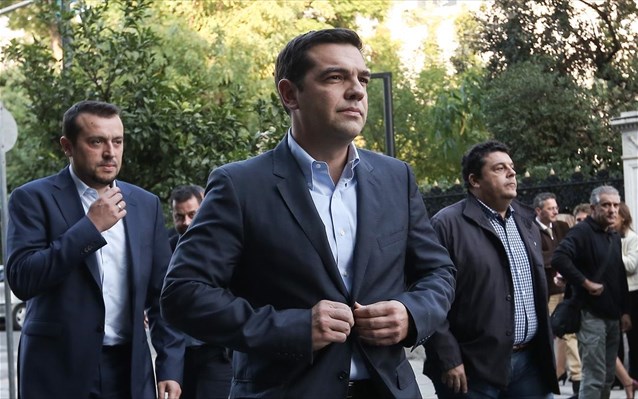 Prime Minister Alexis Tsipras is expected to meet on Friday with German Chancellor Angela Merkel and French President Francois Hollande on the sidelines of the European Council Summit on the refugees issue in Brussels.

The European Summit that ended late on Thursday night in Brussels “acknowledged the key role Turkey plays in the reduction of refugee flows,” Prime Minister Alexis Tsipras said following the conclusion of the meeting.

Tsipras underlined the necessity of Turkey’s implementing all agreements reached at the Summit, noting that the relationship between Greece and Turkey was pivotal in managing and reducing refugee flows. At the same time, he said, there was a need to implement a bilateral Greek-Turkish agreement on readmissions, so that it is possible to immediately return to Turkey all those who “do not fit a refugee profile.”
There was also a commitment by the European Union to pressure third countries into either activating older reintroduction agreements or agreeing to readmissions, he revealed. There must be a legal and safe way of transferring refugees to their destinations, and a comprehensive policy of returns for those who do not qualify for asylum, Tsipras added.
According to the premier, the European leaders recognized the need for a resettlement mechanism applied directly from Turkey and they committed to beginning this in February.
In terms of preparing the hotspots, or centers for refugee registration at the Aegean islands that act as entry points, Tsipras said that Greece will continue to fulfil its obligations, completing the construction of these centres and that of new resettlement centers on the mainland. “Everyone, especially the European Commission president, hailed the progress made by Greece and Italy” on the issue, Tsipras said.
“We will continue to fulfil our humanitarian obligations,” he added, noting that Europe’s future cannot be “a future of walls and violence” but has to be a future of “solidarity, humanitarianism and co-responsibility.”
In terms of the creation of a European border and coast guard agency discussed at the Summit, the prime minister said “it is a decision we welcome” and noted that “it is absolutely clear that the activity of these agencies lies in the responsibility of guarding the borders, which remains a national responsibility,” while a final decision on their creation will have to be made by June 2016.