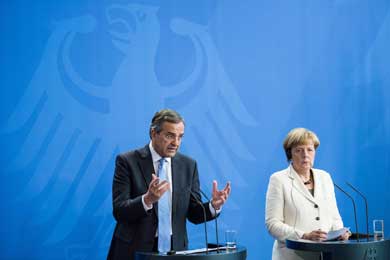 Greece is ready to stand on its own feet, Prime Minister Antonis Samaras said on Tuesday after a meeting with Chancellor Angela Merkel in Berlin, where he set out how Athens could exit its adjustment program at the end of the year, forgoing the remaining loans from the International Monetary Fund.

“Greece will soon put forward its own framework for continuing reforms in the years ahead,” said Samaras, adding that his government is committed to producing primary budget surpluses.

The European involvement in Greece’s program is due to end in December but the IMF still has more than 15 billion euros of loans to disburse to Athens. Samaras said his government is now in a position to turn down these installments and end the monitoring of the Greek economy.

“I believe this cooperation will be completed ahead of schedule,” said Samaras in response to a question about whether Greece is seeking a “divorce” from the IMF. “If that happens, it would be a success, not a divorce,” he added, citing the examples of Ireland and Portugal also exiting their programs.

Samaras pointed to the expected return of growth in the second half of this year and the gradually falling unemployment rate as signs that Greece is turning the corner. Merkel also dwelt on this point.

“I can only say, especially to the Greek people, that I know what a difficult time the country is going through, how many people are still unemployed,” she said.

“But the first tender shoots of success from these efforts are visible and we will do everything from the German side to support this.”

Samaras did not go into detail about debt relief apart from saying that he expects the maturity of Greece’s loans from the eurozone to be extended and some other steps, which he did not describe, to also be taken. Merkel said there would be negotiations “regarding the next steps in the coming weeks.” The impression left by her comments suggests that Berlin will wait for the latest troika review of the Greek program, due to start at the end of this month, to be completed before any decisions are taken.

Opposition parties reacted to the scant results of the meeting in Berlin with scathing criticism.

Leftist SYRIZA declared that the outcome of the talks “deprived the prime minister of the ability to create a pre-election narrative,” a reference to mounting speculation about early elections in view of the leftists’ stated intention to block the coalition’s candidate for president early next year. In a harshly worded statement, SYRIZA referred to the “prime minister’s pathetic image,” which, it said, “undermined himself and the country.”

Independent Greeks leader Panos Kammenos, for his part, condemned Samaras as a “fawning politician” while the Communist Party (KKE) said the premier’s meeting with Merkel “proved once again that any negotiation within the framework set by the memorandum… will yield painful results for the people.”