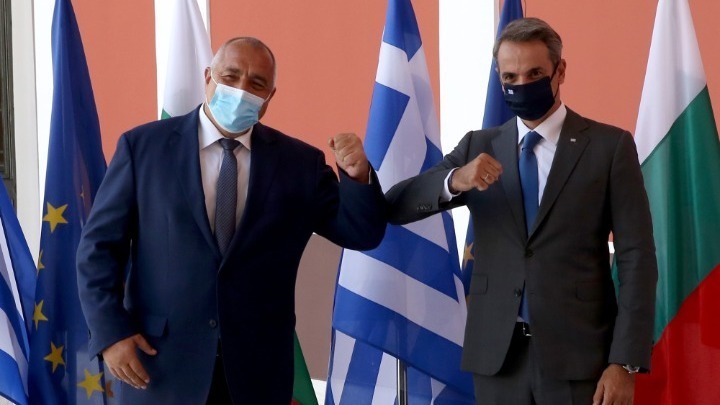 “A lot has happened since we met 7 months ago. A lot has changed on the pandemic front, but it seems that the initiatives were implemented according to the schedule,” Prime Minister Kyriakos Mitsotakis said on Monday during the signing ceremony for the participation of the Bulgarian company Bulgartransgaz to the Alexandroupolis liquefied gas terminal project held at the Zappeion Mansion.

“It was then at its initial phase of preparation. Today, with the signing of an agreement between the shareholders, this large investment is set in motion with the ultimate goal of turning our easternmost port into a global energy hub,” said the Prime Minister.

“The port of Alexandroupolis is celebrating its 150th anniversary this year. It is becoming a hub of cooperation, a source of wealth and prosperity for the countries and for the peoples,” Mitsotakis said.

He added: “In the past, this port was the object of conflicts. Today is an example of how far we can go from peaceful co-existence and economic cooperation for the benefit not only of our two peoples but also of the wider Balkan region.”

The Prime Minister congratulated Boyko Borisov for the participation of the Bulgarian company and wished to meet soon at the official opening.

“Today, with the signing of an agreement between the shareholders, this large investment is set in motion with the ultimate goal of transforming our easternmost European port into a global energy hub. The gas will be liquefied and will meet the national natural gas network and from there it will be channelled at the end of 2022 or the beginning of 2023 to Greece, Bulgaria and the whole of southeastern and central Europe,” said Mitsotakis.

He pointed out that despite the complexity and disruption from the pandemic, the project is being implemented without delay.

He stressed that the gas will reach Romania via Bulgaria, while referring to the benefits of detoxification from more polluting and expensive forms of energy, noting that Greece is implementing a plan for the permanent phasing out of lignite by 2028 at the latest.

“Today’s investment is a precursor for constant and more and more closer cooperation with Bulgaria. The benefits are also geopolitical. The location of the new station in Alexandroupolis will strengthen its geopolitical character and will increase the number of vessels arriving in its ports. This investment will stimulate the dynamic development of eastern Macedonia and Thrace. “When the remote region is prospering, then the whole of Greece is prospering,” the prime minister underlined.

Bulgaria’s Prime Minister Boyko Borisov, who attended the signing ceremony for Bulgartransgaz participation in Alexandroupolis liquefied natural gas terminal station project, stated on Monday from Zappeion Mansion that a few years ago nobody would imagine that this would happen.
Borisov said that they have made investments and changed the dynamics with the investments made under Greece’s friendly shelter.

He also said that today the two countries are in the position to turn the vision of recent past into action adding that there was not only a bridging of the energy sources but both Greece and Bulgaria have become main hubs and are now playing a key role in energy and its distribution.

Borisov said that the projects will support the economies of the countries in the region.

“We have reached a solution that satisfies all sides, both the investors and the partners. So we will be supplied with natural gas from every part of the world. All these flows will be feasible through the investment in this project,” he said and thanked those who continued to work for the project in the midst of the pandemic.