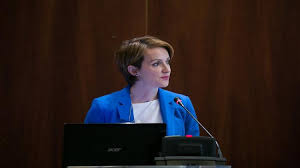 An official announcement of the appointment is expected to be made within the next few days along with the newly elected New Democracy administration’s choices for the equivalent posts at most of the other ministries.

In recent years, Sdoukou has served as an advisor for Mitsotakis and his close associates on energy matters.

Over the past 15 years, Sdoukou has offered specialized legal consulting services on matters concerning development, energy and the environment at related ministries.

Born in 1978, Sdoukou studied law at the Democritus University of Thrace and followed up with two post-graduate degrees, one in European Commercial Law at the University of Bristol, the other in European Economic Studies at the Athens University of Economics and Business. In 2010, Sdoukou also took a special Public Administration course at Harvard University.

She practiced law for five years after completing internships at the European Parliament and the European Court of Human Rights in Strasbourg.