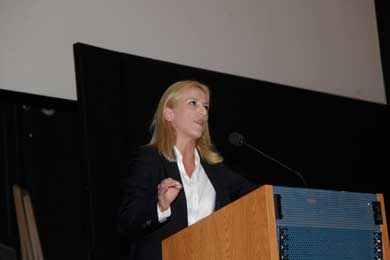 Newly installed Attica Governor Rena Dourou is on a collision course with the government after she won a vote on Tuesday calling for the regional authority not to cooperate with the evaluation of public servants.

The Attica Regional Council voted in favor of Dourou’s proposal that the authority should not provide its employees’ details to inspectors. This also applies to checks on fixed-term contracts that were made permanent in 2006. The government believes that many of these switches were illegal. Dourou, Attica’s first female governor, was adamant, though, that she would cooperate with efforts to root out public sector workers who gained their jobs by using forged qualifications.

“My position is crystal-clear: zero tolerance for the holders of forged degrees,” said Dourou, who blamed previous governments for such cases of corruption in the civil service. She added that she had already approved penalties for such cases which had been pending since March.

She argued that the government’s aim of deeming 15 percent of civil servants who are evaluated as not being up to scratch is illegal and not a genuine effort to assess the performance of public sector staff.

“This evaluation and its quotas are illegal and unconstitutional,” she said, citing court decisions. “The most legal thing I have done in my 40 years is to order the evaluation at the Attica Regional Authority not to happen.”

New Democracy councilor Giorgos Koumoutsakos, who ran against Dourou in May’s elections, said that her decision ran counter to a law that had been passed through Parliament.

“The question is: Will you enforce the law or not?” he said. “Will you act as a governor or as the leader of a SYRIZA group? I have the impression that I am at a gathering led by [Maximilien de] Robespierre sometimes.”