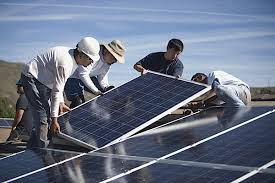 Renewable energy source (RES) producers have been exempted from an Emission Reduction Tariff (ETMEAR) for self-produced electricity through an amendment ratified in Parliament yesterday, paving the way for the signing of a ministerial decision to offer self-producers a net metering plan.

The amendement is one of many processed in Parliament over the past few days of heightened activity ahead of the seemingly inevitable early national elections.

Net metering will enable electricity consumers who generate their own power from an eligible on-site facility and deliver it to local distribution facilities to offset the electric energy provided by the utility during an applicable billing period.

The ministerial decision on the net metering plan is expected to be signed any day now, possibly even today, or before the year is out, no matter what, energypress sources said.

The ETMEARexception for self-producers was originally planned to be attached to a draft bill for gas market reforms. However, it was passed separately as a result of delays in the gas market bill’s progress, making possible the new net metering plan, which photovoltaic producers have keenly awaited.

Self-producers will still be required to pay the ETMEAR tariff for electricity absorbed from the grid whenever they are unable to draw from their own production, such as during the night time. But they will be exempted from paying the surcharge for amounts of self-produced electricity consumed by them. No exemptions will be offered for Public Service Compensation (YKO) payments.

The self-production plan prepared by RAE, the Regulatory Authority for Energy, following public consultation procedures, makes self-production more favorable. Other changes prepared by RAE include increasing the cap for self-production to 20 KW from 10 KW, making available net metering to medium voltage categories, not just low voltage categories, and allowing for greater installation flexibility, meaning that, besides roof tops, PV facilities may also be set up at other household points, such as garage roof tops, gardens, even adjacent plots of land.

It is understood that self-producers will use two power meters, one measuring incoming electricity drawn from the grid, the other self-produced electricity exported to the grid.