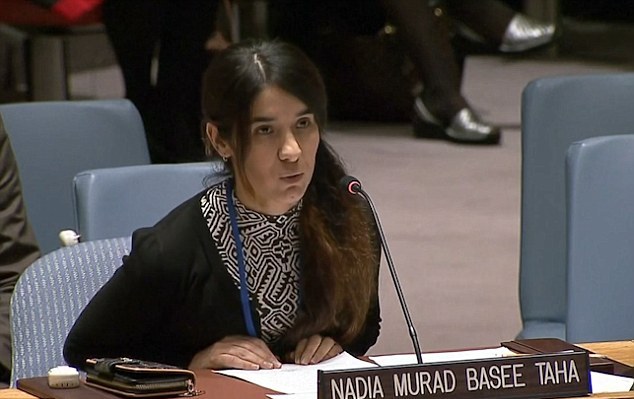 Nadia Murad Basee Taha, who managed to escape from the ISIS, wants to become the voice of the refugees seeking legal ways to Europe.Yazidi rights’ activist is paying a visit to Athens these days in order to stand by the refugees.Murad met with Prime Minister Alexis Tsipras earlier on Friday and discussed issues related to the refugee crisis. She also sent a message to refugees at Idomeni to “accept to be transferred at accommodation centres in order to be safe as the borders will likely remain closed.”In statements to ANA-MPA, she said that she asked the Greek prime minister to create accommodation centres for all the refugees. “I am aware of the difficult situation in Greece and the fact that Greeks are really helpful. The refugees have rather hard times at Idomeni and the port of Piraeus. When they are transferred to accommodation centres, we can ask for more support and assistance from the international organizations,” she added.Murad will visit accommodation centres to see the conditions and discuss with refugees. “When these people are safe at hospitality centres, I will go to Germany and other countries to ask for their relocation,” she underlined.After the borders closed, a lot of migrants have been stranded in Greece, she said adding that she wants to become “their voice.” She estimated that the opening of all borders is probably not possible open after the terror attacks in Brussels and Paris. However, she stressed the importance of a plan that will offer refugees that want to survive from the war, the death and terrorism the opportunity to apply for asylum and allow them to be relocated.“There must be provisions for people that have no alternative. It is not that they seek a better life, but they have no other solution,” she stated.Nadia Murad Basee Taha was abducted from her village last August, she was used as a sex slave and raped until she managed to escape and go to Germany. More than 3,000 Yazidi women and children remain prisoners of jihadists, according to estimates.