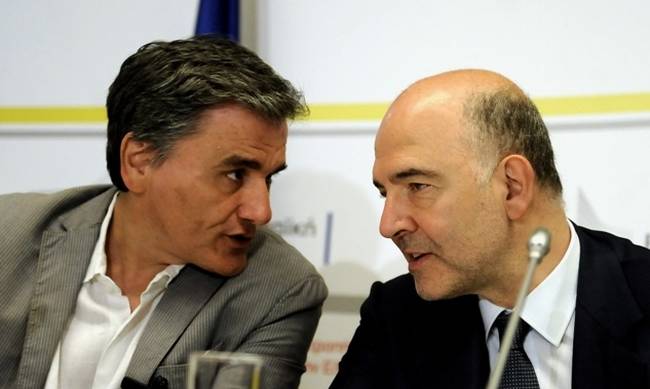 Greece must not slacken the pace of reforms until all the milestones have been reached and all the prior actions completed, European Commissioner for Economic and Financial Affairs Pierre Moscovici insisted on Monday, in a joint press conference with Greek Finance Minister Euclid Tsakalotos following their meeting in Athens.As for a Greek request to “relax” the primary surplus targets after 2019, currently set at 3.5 pct of GDP, Moscovici said he “did not want to have this discussion again” and that it had been raised during his meeting with Prime Minister Alexis Tsipras.“We must put everything on the table during the negotiation that will take place in the autumn,” he noted, while pointing out that the discussion on what was needed for the current programme to succeed had taken more than year. Referring to milestones still pending, Moscovici said tail-end issues from the first review, such a new privatisation fund, the new public revenues authority and the non-performing loans (NPLs), needed to be wrapped up quickly. The prior actions for the start of the second review included labour law, growth strategy, fighting tax evasion and improving tax collection,” he added.“Countries that deregulated their labour market were able to create new jobs,” he said.Tsakalotos said that primary surplus targets will be discussed but only after “we see how it affects the needs of the economy and find a solution in that context,” noting that primary surpluses, measures for the debt and the International Monetary Fund (IMF) participation in the Greek programme, could all be factors.The minister said an economic recovery appeared imminent on the basis on existing indicators, while promising to quickly conclude the September milestones so that the second review might start as soon as possible. There had to be results on the issue of the IMF’s participation, primary surplus targets and measures for the debt before Christmas, he added, announcing that six or seven important bills making major changes will be tabled over the summer.The prime minister had asked that the Greek government be given greater freedom of movement in his meeting with Moscovici, Tsakalotos said, and pointed out the contradiction of asking for more Greek ownership while the institutions continued to micro-manage the programme. Athens had also asked for more tools to promote growth, greater flexibility in the National Strategic Reference Framework (NSRF) funds, the establishment of a development bank and measures to compensate for the loss of the EKAS low pension benefit.Moscovici said support for those that lost EKAS was not a problem, provided it was fiscally compatible with the programme and expressed support for the IMF’s return. He turned down Greek requests to change the law on bank managements, however, noting that the relevant legislation was only recently passed. He appeared confident of positive growth rates in the second half of this year and up to 2.7 pct growth in 2017 pct, provided Greece sticks to the agreements. Otherwise, he warned, the benefits will not become apparent to the people subjected to so many painful measures.