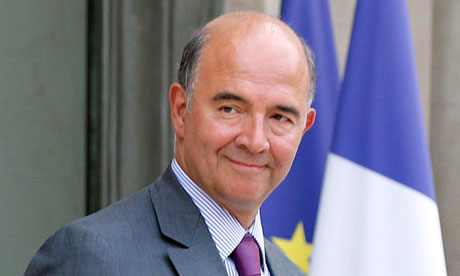 The European Union is not prepared to keep Greece in the euro zone at any price, its financial affairs chief said in a newspaper interview on Wednesday, although he said that a Greek exit would inflict great damage on the currency union.“The Eurogroup has an overwhelming will to keep Greece in the euro zone. Financial accidents can happen. Our task, however, is not to organise this but to prevent it,” Pierre Moscovici, the financial affairs chief, told German daily Die Welt, Reuters reported.The Eurogroup is the group of euro zone finance ministers.“We won΄t keep Greece in the euro zone at any price, but under strict conditions which are acceptable for both sides,” Moscovici said, adding that any possible third aid package must look different to previous ones.His comments follow remarks from German Finance Minister Wolfgang Schaeuble last week that Greece may stumble out of the euro zone because its leaders had failed to negotiate new borrowings.Greece risks running out of cash within weeks, but its EU partners, angered by the new government΄s fiery rhetoric against the country΄s international bailout, have frozen financial aid until Greece shows it is implementing reforms.Greek Prime Minister Alexis Tsipras wants to meet top European leaders at this week΄s EU summit, a Greek official said on Tuesday, as Athens insisted it would not be “blackmailed” over its debt crisis.Moscovici said the euro zone was in a better position than two years ago but warned a Greek exit from the single currency would still inflict great political damage.“Everyone would ask, Which member state is next?” he said.