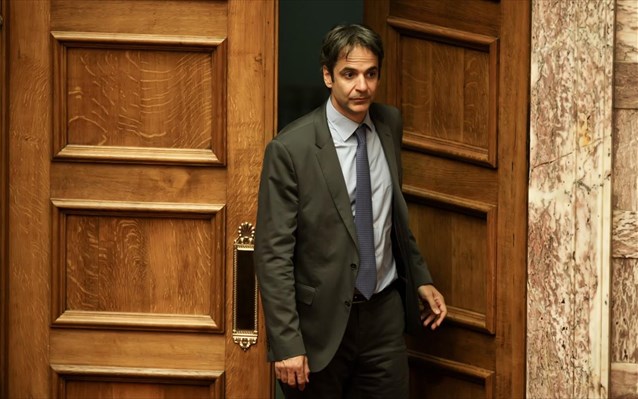 Climate change needs to be moved up the hierarchy of political priorities in Greece since it represented the “biggest long-term threat facing the country”, main opposition New Democracy leader Kyriakos Mitsotakis stressed on Sunday, while addressing an ND preconference seminar on the environment.
Mitsotakis underlined that this effectively amounted to a defence policy for Greece, since the phenomenon would bring about more extreme events like the recent disastrous floods in Mandra, which cost 23 lives and caused untold damages.
The state needs an entirely different approach to these issues, Mitsotakis said, outlining ND’s policies for protecting the environment and reducing greenhouse gas emissions.
He spoke at some length about what had gone wrong in Mandra, noting that the problem was not a lack of funding as a lack of organisation and coordination between the various agencies involved.
One week ahead of ND’s 11th Conference, Mitsotakis also noted that the next weekend will be the starting point of a “a great journey to make ND a government of the country once again and be rid of the worst government we have seen in the post-junta era.” In order to achieve a decisive election victory, ND must convince voters that it has a well-structured plan for leading Greece out of the crisis, not just that it is different or better than SYRIZA
Presenting ND’s plan was the purpose of preconference events such as this one, Mitsotakis told the seminar in Peristeri. “We submitted proposals, outlined ideas, invited speakers that do not necessarily belong to ND…so that we could present to Greek society a holistic and structured plan on how we will finally emerge from the crisis,” he said.
Mitsotakis concluded his speech by ratcheting up his criticism of the government, noting that Greece had “paid dearly for the SYRIZA-ANEL experiment” and promising that ND was “ready to step in and take on a difficult situation.”