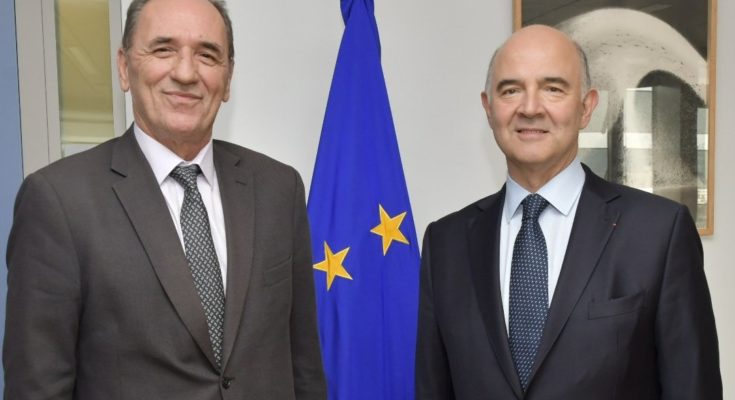 Energy Minister Giorgos Stathakis has made what appears to have been an impromptu trip to Brussels for a meeting yesterday with the European Commissioner for Financial Affairs Pierre Moscovici to discuss issues concerning the main power utility PPC’s bailout-required sale package of lignite units.

Stathakis’s meeting with Moscovici was probably held in an effort to prepare the ground for the arrival of bailout technocrats in Athens next week as it is suspected that the content of the PPC sale package proposed by Greek officials is troubling the lenders, particularly the European Commission.

The ministry issued a brief statement contending that yesterday’s meeting between Stathakis and Moscovici had been planned, but TEE, the Technical Chamber of Greece, informed that the energy minister was scheduled to attend an event it staged, also yesterday. According to TEE, the event’s organizers were informed that the minister would miss as a result of unexpected obligations abroad.

Greek officials are presumably seeking the European Commission’s Directorate-General for Competition’s acceptance of Greece’s lignite-only PPC proposal, even if certain revisions must be made. Stathakis, at yesterday’s Brussels meeting, is likely to have sought Moscovici’s support for the Greek plan.

The European Commission’s Directorate-General for Competition has already informed Greek officials that their proposal requires substantial changes. Less than a fortnight ago, at a meeting in Brussels, the energy ministry’s secretary general Mihalis Veriopoulos was explicitly told that the Greek proposal, in its current form, cannot guarantee a successful market test, scheduled for next month.

At this stage it appears that the sale package, offering 40 percent of PPC’s lignite capacity, will most likely need additions.