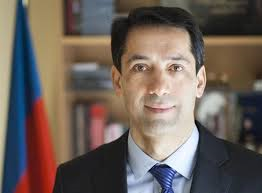 Highlighting the significance Greece places on its energy ties with Azerbaijan, it was the newly appointed minister’s first official engagement with a foreign diplomat since the leftist Syriza party’s Greek election victory nine days ago.

“The new government will seek to improve TAP’s benefits with regards to our country,” Lafazanis remarked. “We have expressed our reservations about the TAP pipeline’s transit terms for our country’s interests. We continue to want the pipeline to pass through Greece. We support the TAP project and its transit through Greece. This is in the interests of the country and wider region, and will offer energy security and sufficiency for all nations.”

Also at the meeting, Lafazanis reiterated his party’s objection to an unfinished privatization agreement for DESFA, Greece’s natural gas grid operator, between the previous Greek administration and the Azeri energy company Socar. The deal was halted for investigation by the European Commission over EU competition concerns. Lafazanis now says Greece will await news from Brussels before any decision is made.

“We will wait for a decision from the European Commission before determining our next moves,” Lafazanis remarked.

Mustafayev, the Azeri diplomat, avoided offering a clear-cut response to a question on whether Azerbaijan would link the European Comimmission’s decision on DESFA with its development of the TAP project.

“Let’s wait for the final decision. It’s very important for us. We’re optimistic,” replied Mustafayev, who described today’s meeting between the two officials as friendly and constructive.