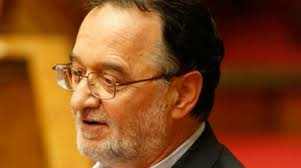 The minister, who commented on PPC’s standing during an official visit to Kozani, northern Greece, accompanied by Syriza party officials, stressed that a privately-owned PPC would prove catastrophic for the economy, which is why the government has rejected the previous administration’s plan to break up and privatize PPC, he added.

The minister noted that energy was a key pillar for economic growth, while PPC was pivotal in the energy sector.

The minister also said the government fully backed the development of a new PPC power station in Ptolemaida, northern Greece, noting that the unit, Ptolemaida 5, would be environmentally friendly and facilitate the country’s energy prospects.

Lafazanis, who noted that he signed permits for the power station’s construction just days ago, stressed that an effort will be made to complete and launch the unit as soon as possible. The project’s cost will be renegotiated with the aim of lowering its budget amid the country’s challenging economic conditions, the minister said.

Commenting on PPC’s electricity rates, the minister admitted energy is “extremely expensive in our country”, while adding that the new government’s first legislative action will include an amendment to cancel a surcharge hike planned by RAE, the Regulatory Authority for Energy. Lafazanis said the government was planning to take further action to reduce PPC electricity prices.

Once again voicing his opposition to RAE’s authority, the minister noted that a regulatory authority is essential in the market but could not exceed the powers of the government and shape PPC’s pricing policy.

His visit to the country’s north included a tour of a thermal power station in Kardia, in the western Macedonia region, where Lafazanis met with the station’s director, Vassilis Tsigas, and employees. The Kardia power station’s head informed the minister of problems encountered, such as a staff shortage – no hirings have been made since 2010 – as well as lignite supply problems, both qualitative and quantitative.

Tsigas told Lafazanis he was the first minister to visit the power station since 1991.