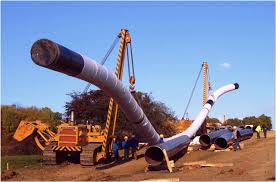 Production Reconstruction, Environment and Energy Minister Panagiotis Lafazanis may be denying rumors generated over the past few days of an upcoming visit to Athens by Gazprom CEO Alexey Miller, but this certainly does not mean that talks with Russian officials for “Greek Stream” – the local segment of “Turkish Stream”, Russia’s latest natural gas pipeline proposal for supply to the EU from the south – are not in progress.

As was made evident at the recent meeting of EU energy ministers, the pipeline, intended to bypass Ukraine, cross the Black Sea, and reach the Greek-Turkish border area, is at the top of Lafazanis’s agenda. In comments offered yesterday, the minister assured the project would comply with EU regulations. Both the EU and USA have not embraced the current revival of bilateral ties between Greece and Russia.

According to sources, the Greek energy minister wants a memorandum of understanding, or some form of an agreement, to be signed before next Friday, when the next Eurogroup meeting of EU finance ministers is scheduled to take place. This rush can be linked to an intention by Lafazanis to incorporate – yet again, even if just symbolically – the pipeline project’s developments, as well as Greece’s developing ties with Russia, as negotiating tools at the next Eurogroup meeting.

The sense of urgency has prompted Russian officials to offer their first estimates of the project’s cost, as well as shape. At this stage, it appears that the new Russian gas pipeline proposal will run the same length as South Stream, Russia’s indefinitely shelved previous proposal that would have reached Bulgaria via the Black Sea. Also, the new proposal’s total budget is expected to reach a similar level to that of South Stream, which had been estimated at 15.5 billion euros. Russian company Gazprom has declared that a submarine gas pipeline crossing the Black Sea, already constructed as part of the South Stream project, will now be used for Turkish Stream.

Lafazanis, in another comment yesterday, highlighted Greece’s interest in establishing itelf as a regional energy hub by reiterating the country’s support for TAP (Trans Adriatic Pipeline), the rival pipeline to supply Azeri natural gas to the EU via Greece, now under construction. Greece’s dual support for both projects has drawn heavy criticism from critics who have described the government’s geopolitical energy maneuverings as uncoordinated and without prospects.

The EU, striving to diversify Europe’s energy options by reducing the continent’s reliance on Russia, is not at all happy with Greece’s contact with Moscow amid the overall effort being made to establish Azerbaijan as a key natural gas supplier to the EU.