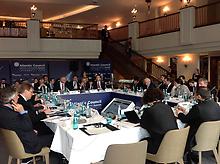 Maniatis, who was in the Turkish city late last week to attend an energy and economy summit organized by the US think tank Atlantic Council, also took part in two Turkish ministerial meetings.

The Greek minister told his Turkish colleagues, at one of the two ministerial meetings he attended, that the European Commission president Jean-Claude Juncker was making good use of a 300-billion euro energy package.

Maniatis also pointed out that Greece is focusing its efforts on three energy-related projects, TAP (Trans Adriatic Pipeline), to serve the region’s Southern Gas Corridor, development of the IGB pipeline to connect Greece and Bulgaria, as well as construction of the East Med Pipeline, intended to carry gas from Israeli deposits towards Europe.

At the second ministerial meeting attended by Maniatis, whose focus was on the completion of Europe’s energy integration, especially matters concerning north and south, the Greek minister spoke of the need for the establishment of a common energy market and full development of interconnecting pipelines between EU member states. Maniatis spoke more extensively on an initiative to develop gas pipeline infrastructure that will connect Greece, Bulgaria, Romania, and Hungary. The Greek minister also discussed this prospective project with Bulgaria’s Deputy Minister for Energy Anton Pavlov, as well as the respective Energy Ministers of Romania and Hungary, Razvan Nicolescu and Andras Aradszki.

The Greek minister also met with US Secretary of Energy Ernest Moniz, as well as Amos Hochstein, Acting Special Envoy and Coordinator for International Energy Affairs at the US Department of State. The three officials discussed the prospects of Greece becoming an energy hub in the region.

During his meeting with Turkish Energy Minister Taner Yildiz, the Greek Environment, Energy & Climate Change Minister presented Greece’s positions on Cyprus’s Exclusive Economic Zone (EEZ), while expressing hope that a cooperation council to be set up by the two countries in early December will contribute to diffusing the current tension.