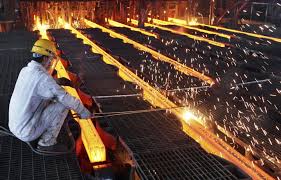 The Panhellenic Federation of Metal Workers (POEM) has expressed concerns over the prospects of an energy-cost saving “power disruption management” plan initiated by the country’s previous administration, fearing it may end up being entangled in complexities.

In a letter forwarded to Production Reconstruction, Environment and Energy Minister Panagiotis Lafazanis, and the General Secretary for Industry, Yiannis Tolios, the workers federation, obviously expressing its concern for the country’s entire industrial sector, noted that “delay tactics” are holding back the energy cost saving policy’s implementation.

A committee was assembled to address industrial sector energy costs, with a focus on the funding details of a “power disruption management” plan, to enable energy cost savings for major-scale industry in exchange for shifting energy usage to off-peak hours whenever required by IPTO, the power grid operator.

The committee met recently for a third and final round of talks to determine when the measure will be launched and who will cover its cost, whose latest estimate ranges between 50 million and 60 million euros per year. The energy minister, who is ultimately responsible for the plan, has not delivered any announcements. Where the matter stands and may head remains unclear.

Two basic options seem to have emerged from the committee sessions. One of these is to propose the “disruption” plan’s implementation as it stands – in the form shaped by the country’s previous administration and approved by the EU – as soon as possible, meaning within the next two to three months. This would cost photovoltaic producers 3.6 percent of their total revenue and wind-energy producers 1.8 percent of their revenues.

The other option is to make revisions to the measure’s funding, with a reduction of RES sector contributions. If such a course is chosen, small-scale photovoltaic producers would be offered the greatest contribution cuts, based on a pledge made by the energy ministry. It remains unknown whether the European Commission will permit any revisions to the original plan.

A third option, which was proposed by certain RES sector represenatives, entails delaying the plan’s implementation until 2016. This could allow the plan to be entirely financed by funds raised from emission tariff auctions which, by 2016, will no longer be injected into the RES special account maintained by LAGIE, the Electricity Market Operator.

The drawback in this case is that an alternative solution will need to be found to reduce the industrial sector’s electricity costs. A rate reduction for the sector by the power utility PPC stands the risk of being deemed as a form of state aid by the European Commission as the rates would fall below production cost levels declared by PPC.