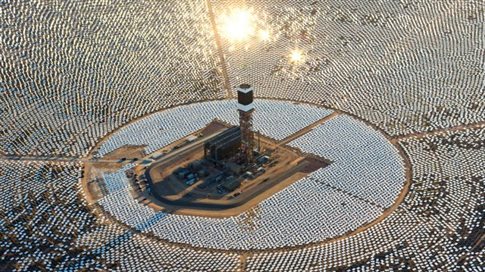 Three-hundred 24-metre towers made of high-grade graphite, trackers, solar thermal systems, and steam turbines will be used for the construction of an innovative photovoltaic project to operate in Cyprus, around the clock.

The project, concerning the Paphos-based firm Alfa Mediterranean Enterprises, will be developed in Limassol’s Alassa region. Innovative technology developed by the Australian firm Solastor will be applied for its construction. The solar thermal project, a 50MW-capacity facility, has been budgeted at approximately 175 million euro, of which 60.2 million euro is expected to be provided by the European Investment Bank.

Solastor, Alfa Mediterranean’s technological associate for the project, released a statement noting that the project would be the Mediterranean’s first solar thermal renewable energy system to operate on a 24-hour-a-day basis, as the use of graphite allows for embedded storage. The technology to be employed entails heating graphite and using heat exchangers to produce superheated steam for driving steam turbines. The firm also highlighted this technology’s high production capacity as a major advantage. Aspects such as the accumulative pattern of the graphite towers used contribute to the technology’s ability to produce approximately 2,000 MW per hectare annually, almost double that of other similar systems.