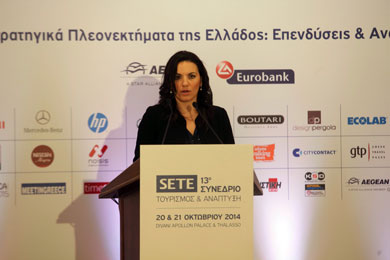 Next year could turn out to be a season of significant investments in the tourism sector, Tourism Development Minister Olga Kefaloyianni said on Monday while addressing the first day of a conference organized by the Association of Hellenic Tourism Enterprises (SETE) in Athens.

The minister expressed optimism that after 2014, 2015 will prove to be another record year for Greek tourism. She also noted that the new European Union funding period will spearhead the overall evolution of the tourism product.

Regarding the Greek capital, Kefaloyianni said that the increase in tourism has brought revenues of 142 million euros into the city’s real economy so far this year – i.e. for hotels, commerce, catering companies, taxes and municipal levies. She did stress however that a number of problems will have to be resolved to unblock the way toward major growth, such as the issue of Sunday opening for retail stores.

Development Minister Nikos Dendias announced that a series of unnecessary licenses that add to red tape in tourism will be abolished by the end of the year. As an example he cited the requirements for separate operating permits for bars, restaurants or spas within an already licensed hotel.

Dendias also spoke in favor of reducing tourism taxes and estimated that Greece requires 100 billion euros in foreign investments to kick-start its economy. He said that the internal consultation process on the bill regarding the new EU funding program (2014-20) will be completed in the next couple of weeks so that talks can begin next month on Greece’s new growth plan.

On the new status of state subsidies introduced by the EU, which imposes limits on major tourism investments, Dendias said that a working group has already been set up by the Tourism Ministry, SETE and the Hellenic Chamber of Hotels, which is examining three ways of responding.

SETE head Andreas Andreadis said the Tourism Ministry is preparing a study on the extension of the tourism season, which is the main theme of the conference. The plan will initially concern the Dodecanese Islands and Crete.