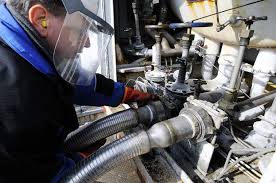 DESFA, Greece’s natural gas grid operator, has listed the development of an LNG truck loading station as a priority project in its rolling ten-year plan, covering 2015 to 2024.

A tender for a plan to detail the project’s needed infrastructure is already in progress. DESFA aims to launch the project in 2016. The prospect has already triggered the interest of industrial consumers, which, DESFA forecasts, will increase LNG demand to five million cubic meters, annually, by 2020.

The cost of installing systems facilitating LNG gas use in industry is nowadays a low-cost investment. Also, LNG is an environmentally friendly alternative that is competitively priced compared to other liquid fuels.

Besides establishing an LNG truck loading station, DESFA is also examining plans to widen the use of LNG usage in sectors such as shipping and vehicles, as well as promoting the use of LNG as an alternative to petrol at electricity power stations on the islands.

LNG usage is expected to increase considerably in Greece in the near future. The forecast is primarily based on policies adopted at a European level and expected to be implemented by 2025.

With this prospect in mind, DESFA plans to further upgade an LNG terminal on Revythoussa, an islet in the Saronic Gulf, close to Athens.

The gas operator intends to conduct a preliminary study whose objectives will include determining the technical requirements and the cost entailed in developing an LNG refueling station for small vessels in Revythoussa. Other plans, seen as long-term, include establishing a network of small-scale coastal LNG storage facilities as well as LNG truck loading stations in these areas.