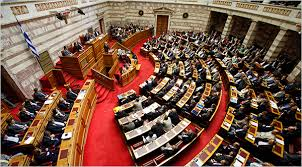 The government garnered 160 votes in the first round of crucial presidential elections on Wednesday, performing slightly worse than anticipated and increasing speculation about snap polls.

In addition to the 155 coalition MPs, five independents backed the government’s candidate, former European commissioner Stavros Dimas. Another 135 voted “present” while five were absent. The result was far short of the 200 votes required in the first round, a target that the government is also certain to miss in next week’s second round. However, ahead of the critical third vote on December 29 when the threshold drops to 180, the government had hoped to gain between 161 and 165 in the first round in a bid to build momentum for the votes to come.

There were some surprises, including the decision by independent Panayiotis Melas to vote “present” rather than backing Dimas (Melas later suggested he might change his stance in the coming votes). Also two former MPs of neofascist Golden Dawn, Chrysovalantis Alexopoulos and Stathis Boukouras, who was released from prison earlier on Wednesday, did not turn up for the vote.

Meanwhile seven Golden Dawn lawmakers were granted day release from Korydallos Prison to attend the vote. They were subdued for the most part despite fears of upheaval.

As the government ramps up efforts to win round undecided MPs, sources suggested that an initiative by five independents and three Democratic Left MPs aimed at securing a cross-party consensus for president and setting elections later next year could gain extra backing in the coming days.

“The fearmongering of the last few days failed,” said Alexis Tsipras as he left Parliament. “The strategy of fear has collapsed. Tomorrow will be a new day because democracy cannot be blackmailed. The people and democracy will provide the way out.”

SYRIZA sources said that the opposition party feels Wednesday’s result fell below the government’s expectations and now makes it very difficult for a president to be elected by the current government. SYRIZA had estimated that a maximum of 163 MPs would back Dimas in the first round.

The opposition party believes that the government has secured the backing of several more independent MPs who did not show their cards on Wednesday. It believes that these lawmakers might support Dimas in the next vote to give the impression that there is some momentum behind his candidacy.

Ahead of the vote, Deputy Prime Minister Evangelos Venizelos met with his MPs and suggested that the government would be open to suggestions that might help reach a compromise with the opposition so a president could be elected. He suggested, for instance, providing SYRIZA with representation on a Greek team to negotiate with the troika.

“We advance to the third round while waiting for a response from opposition parties to an approach that would link the presidential election to the national negotiation team,” he said. “Then we would be open to discussing all options because what we are concerned about is the national interest”.