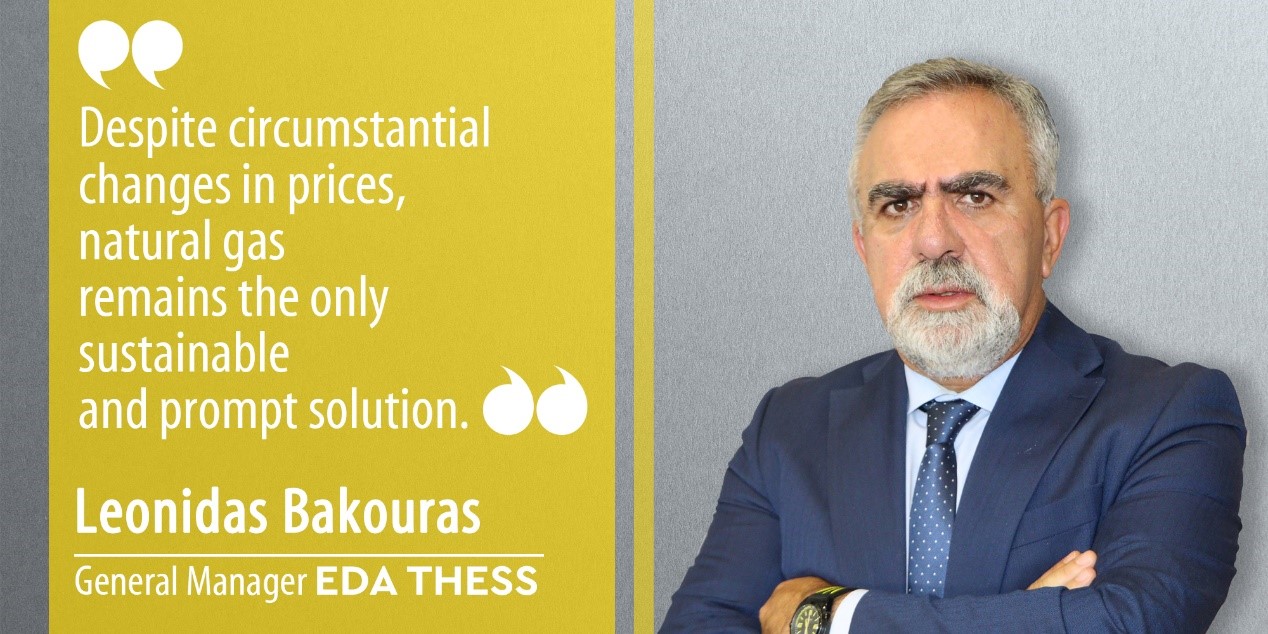 The volatility of the natural gas wholesale market around the world is unprecedented, as prices reached an all-time high. The current situation is due to a multifactorial equation with contextual factors acting simultaneously, leading to extended price surge. However, the General Manager of EDA THESS, Mr. Leonidas Bakouras endorses the forecasts of analysts talking about a transient increase in prices.

The final price charged to the End Consumer is normally shaped by the sum of the Transmission Tariff, the Distribution Tariff and the Competitive Supply Charge, directly linked to the prices of the International Natural Gas trade and imports. Contrary to the natural gas supply prices, the distribution and transmission prices are regulated and invariant during each year of the regulatory period.

In its 21-year history, natural gas has been proven to be the safest, most user- and environmentally friendly conventional fuel offering multiple benefits to the society, the economy and the environment.  Similar circumstances in the past had led to a significant increase in the prices of natural gas due to the large-scale transient surges of winter 2008-2009. However, natural gas maintains, over time, the trust of consumers who enjoy the benefits stemming from its use, as the price of natural gas was and still is significantly lower and more competitive than the rest of the conventional fuels.

Consumer’s trust is depicted on the high penetration of natural gas, as more than 385.000 families and households are supplied by the Distribution Network in the License areas of EDA THESS. Despite the current energy crisis, the interest of consumers for their transition to the use of natural gas continues since, only in October, more than 170 new connection contracts are signed daily.

The General Manager stated to this effect: “Despite circumstantial changes in prices, natural gas remains the only sustainable and prompt solution. As the cleanest fuel, it is clearly the main instrument for the transition to the decarbonization of the country. At the same time, it will continue contributing to the energy security of the country and of the EU member-states.

I am certain that the measures taken at the European and national level will partially absorb the impact of the price surge in the upstream market to the benefit of the consumers. Pursuant to the recent statements of the State, the heating allowance rises, and the inclusion criteria are expanded, covering – among others – part of the natural gas consumption cost.”

In this context and in view of the upcoming winter season, EDA THESS encourages consumers to:

Summarizing, the General Manager stated that the measures announced by the state in conjunction with the contribution of consumers through prudent consumption management will create a safety net of constant value against transient price surges.