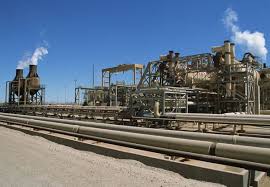 Greece’s lenders are pushing for the completion, as soon as possible, of an unfinished deal between DESFA, the natural gas grid operator, and Azerbaijani energy company Socar, the winning bidder of an international tender in 2013 offering a 66 percent stake in DESFA.

Declan Costello, the head of the European Commission’s mission to Greece, met yesterday with the country’s energy minister Panis Skourletis, who responded to the request for swift completion of the deal by noting that Greece has never opposed this privatization.

The intentions of Socar, repelled by a recent revenue-restricting measure imposed on DESFA by the Greek energy ministry, remain unknown. A letter of guarantee provided by Socar expires at the end of this month.

The Azerbaijanis have indicated that a substantial reduction to the deal’s initial price tag, 400 million euros for a 66 percent stake, is needed if Socar is to remain interested.

The Greek government, as was pointed out to the creditor representatives yesterday, insists that the revenue-restricting measure was implemented to protect consumers from hefty gas price hikes and that it will not budge on the 400-million euro price it originally agreed to.

According to sources, Greek officials yesterday declared they are ready to meet with Socar officials and explore ways of finalizing the stranded deal. For the time being, communication between the two sides is limited to exchange through media reports.

Prior to the recent Greek DESFA-related revisions, the European Commission, acting last year, decided that Socar must surrender 17 percent of DEFSA’s 66 percent to a European operator, reducing the stake the Azerbaijani firm would acquire to 49 percent.

It is now believed that a further reduction could help finalize the deal. In this case, Italy’s Snam, believed to have agreed to take on the surrendered 17 percent stake, would end up with a greater share. ELPE (Hellenic Petroleum), which holds a 35 percent stake in DESFA, appears willing to maintain this share. The Greek government endorses this stance.