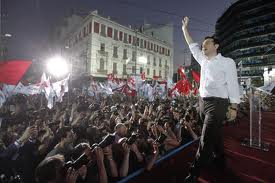 A delegation of key officials at Syriza, the main opposition leftist party that has adamantly attacked many of the coalition’s policies, including privatizations in the energy sector, has met with all the Greek energy sector’s main corporate players, domestic and foreign, as well as foreign fund representatives, over the past year, at least, according to confirmed reports, as part of an overall effort to appease the business community’s concerns if the party is elected to power.

Besides constituting an effort by the Syriza party to appease anxiety in the business community over an abandonment of national investment plans and agreements, the meetings have also offered corporate leaders an opportunity to exchange views with key members of the political party anticipated to eventually govern the country.

Nowadays ahead by several percentage points in various polls after traditionally just making the three-percent cut for a place in Parliament, Syriza has vehemently opposed the coalition’s privatization plans, public sector job cuts, and even questioned Greece’s place in the euro zone. The country could face early elections next spring if Greek Parliament’s political parties fail to agree on a new President, a development that would topple the government, despite this being a ceremonial post.

Although Syriza officials have mostly maintained their guard on the party’s intended policies, sticking to the safety of diplomatic language, the party appears to have softened up on previously radical views.

Syriza is believed to have committed to not taking any rash action that would endanger the country’s place in the euro zone and lead to further havoc in Greece. Also, any privatizations already completed will not be altered, party officials have supported at these meetings. Based on hints stemming from within Syriza’s ranks, it is believed that the party’s hard line on state control in areas such as banking, energy, and water, is also transforming. State control combined with private management has apparently been suggested as an option the party could adopt.

Syriza officials, however, are adamant about their views on a change of economic policy that would end austerity measures and instead focus on seeking ways to stimulate market activity without causing new deficit problems.