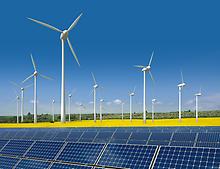 LAGIE, the Electricity Market Operator, issued a bank payment order today for the settlement of renewable energy source (RES) invoice amounts concerning production in June, 2014, as well as remaining amounts for the months of April and May.

The order concerns all RES producers who had submitted official declarations stating that they had not received any subsidized financial aid until July 15, 2014.

To date, 90 percent of RES facilities have been fully paid for production in June.