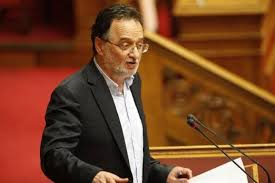 Delivering a policy speech in Parliament today, Production Reconstruction, Environment and Energy Minister Panayiotis Lafazanis reiterated previous government announcements for the energy sector, including new roles to be played by PPC, the Public Power Corporation, DEPA, the Public Gas Corporation, and ELPE, Hellenic Petroleum, and the cancellation of sector privatizations.

Lafazanis pointed out that his ministry’s renaming – from Environment, Energy & Climate Ministry under the previous administration – was not coincidental as production reconstruction stands as a leading priority for the newly elected leftist Syriza-led coalition government.

The newly appointed minister stressed that the government will support  the development of innovative industrial initiatives, including the interests of employees and the environment.

He noted that the General Secretariat for Industry would be revamped while adding that the implementation of specific sector policies would be pursued despite obstacles set by EU regulations. Lafazanis cited the shipyard industry as an example.

Lafazanis slammed the energy-sector policies pursued by the previous coalition government, especially in electricity, describing them as disastrous.

“PPC was downgraded and ripped off. If it does not change course quickly, it will be led to suffocation. Electricity prices have skyrocketed to unbelievable levels and are worsening the recession,” Lafazanis remarked. “The much-heralded market’s liberalization may have benefited major private-sector interests but it disorganized the market. Energy-related poverty has spread to unprecedented levels and overdue unpaid power bills owed to PPC exceed 1.7 billion euros,” he continued.

On renewable energy source (RES) production, the minister noted that its share in the energy market had grown significantly but smaller ventures were being wiped out and were at a loss as to when they would be paid for production. The RES sector is owed over 500 million euros for production distributed to the grid. PPC’s cash-flow problem is the root of this problem.

Lafazanis reiterated that the new government will cancel the previous administration’s plan to dismember and part-privatize PPC, as well as its effort to privatize IPTO. PPC subsidiary firm PPC Renewables will no longer be degraded but, instead, will play a leading role in the RES sector, Lafazanis asserted.

On a wider scale, PPC will serve as a driving force for a new energy policy that will support the industrial sector and economic growth, the minister said, adding that the utility needs to be restructured, staffed with new staff members, and disentangled from private-sector interests. Restructuring at PPC could lead to a production cost decrease of between twenty and forty percent, Lafazanis noted, referring to a study conducted on the issue by RAE, the Regulatory Authority for Energy. The benefits could be rolled over onto consumer and business electricity bills, he added.

The minister reiterated the government’s plan for free electricity to 300,000 households currently living under the poverty line.

On natural gas, Lafazanis said his ministry will “strive to achieve lower supply prices, currently the most expensive in Europe.” DEPA, the Public Gas Corporation, will be reconstructed to assume a role, without intermediaries, as a gas supplier for the entire country. “All privatizations plans are being abandoned,” he noted.

On the previous administration’s unfinished attempt to privatize DESFA, the Natural Gas Transmission System Operator, Lafazanis noted: “If we were the government, we would not have proceeded with this privatization. Besides, [Azeri energy company] Socar which is interested in acquiring DESFA, is a state-run company itself. It is not coincidental that most planned privatizations are nationalizations as they [companies up for sale] would be passed on to foreign state-run companies.”

The government will decide on DESFA once the European Commission completes its investigation into the agreement between Socar and the previous Greek administration over EU competition concerns, Lafazanis reiterated.

Commenting on the fuel market, the minister noted that ELPE could play a major productive role, as well as a key role in reducing fuel price levels in the Greek market.

On hydrocarbon exploration, Lafazanis said his ministry would push to the limits in search of solid partnerships. Following the completion, last Friday, of a tender for three onshore blocks in western Greece, a new hydrocarbons state company will be established for future activity, the minister reminded. An ongoing tender for exploration and exploitation of twenty sea blocks in the Ionian Sea and south of Crete will be reexamined, he added.

Concluding his speech, Lafazanis declared Greece will pursue a new energy policy through which the country will no longer play a subordinate role as a satellite state dependent on other countries, or groups of countries. Instead, Greece will employ a multi-leveled, multi-dimensional energy strategy in partnerships promoting national interests, he noted.