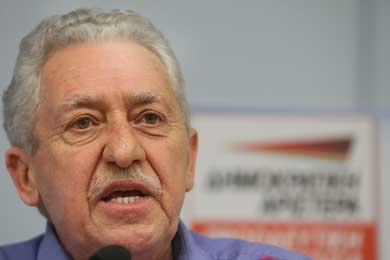 Kouvelis, whose party is in a state of disarray after polling at just 1.2 percent in May’s European elections, sent two letters. One was destined for Tsipras, while the other was addressed jointly to Venizelos and four other politicians: To Potami leader Stavros Theodorakis, Education Minister Andreas Loverdos, who also heads Pact for a New Greece, former PASOK minister Louka Katseli and the leadership of the Ecologist Greens. Kouvelis also wrote to a number of independent lawmakers.

Kouvelis called for “alliances with deeply political content” that would help take Greece in a more progressive direction. “The country needs an alternative plan to exit the crisis that will secure its European course,” the DIMAR leader said in his notes.

He set out 12 policy points on which all the parties should agree. These include committing to a future in the euro area, restructuring Greek debt so it becomes sustainable, reforming the tax system, rolling out programs to tackle unemployment, restoring labor rights and decoupling public sector reform from across-the-board sackings.

Venizelos, who headed the three-party Olive Tree alliance in the European elections, is expected to give his response on Wednesday.