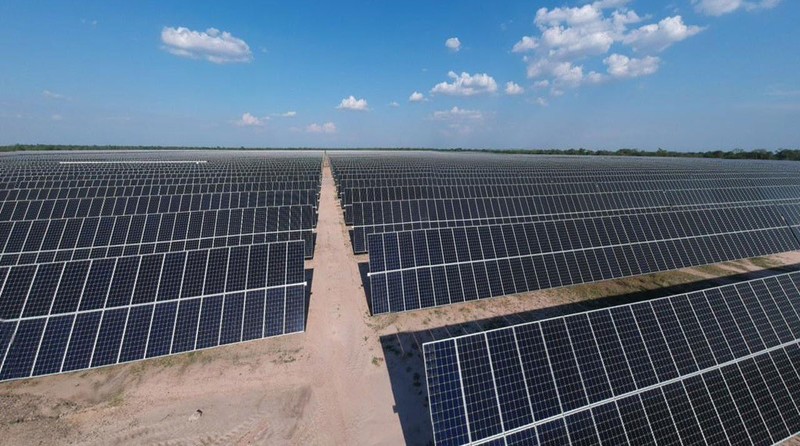 A 30-year Power Purchase Agreement was been signed by the consortium this week with Emirates Water and Electricity Company (EWEC), a leading company in the coordination of planning, purchasing and providing of water and electricity across the UAE, the statement noted.

With an expected production capacity of 2 GW, the Al Dhafra Solar PV Project will almost double the size of the approximately 1.2 GW Noor Abu Dhabi solar plant – amongst the largest operational solar PV plants in the world. The Noor Abu Dhabi project, which was awarded to Marubeni Corp and Jinko Consortium in 2017, commenced commercial operations in April 2019.

Once operational, the Al Dhafra Solar PV Project will lift Abu Dhabi’s total solar power generation capacity to approximately 3.2 GW. This will reduce the overall Emirate’s CO2 emissions by more than 3.6 million metric tons per year, which is equivalent to removal of the combustion output of approximately 720,000 vehicles.

In June 2019, EWEC, a part of ADQ, launched a call for tenders. The winning consortium formed by China’s JinkoPower and France’s EDF Renewables submitted the most cost-competitive tariff of USD 1.35 cent per kilowatt-hour on a levelized cost of electricity (LCOE) basis, which is approximately 44% lower than tariff set by Jinko Consortium three years ago on the Noor Abu Dhabi project – Abu Dhabi’s first large-scale solar PV project and a world record tariff-setter at the time.

With the collaborative effort and consensus with the partners, JinkoPower-EDF Renewables is committed to begin the development of the Al Dhafra Solar PV Project by delivering diligently the latest world-class technology and construction methods in order to reach its commissioning by 2022.

Charles Bai, President of Jinko Power International Business, commented: “Jinko, once again, is privileged to take on the unforeseen challenge of building the largest PV generation plant in the world, following our success of Noor Abu Dhabi project. Utmost fairness, transparency, and an attractive environment for investors underpin our long-term desire to keep developing renewable energy projects in Abu Dhabi. The Al Dhafra Solar Project raises the bar for international infrastructure investment and creates the avenue for an elite group of competitions to demonstrate how records can be made. Today Jinko undertakes within our capacity to deliver this technology and construction benchmark in two years to come. We are proud to have the chance to break our own world record and Jinko will diligently execute this project with our partners.”

Speaking about the milestone, Othman Al Ali, Chief Executive Officer of EWEC, said: “We are delighted to work with our partners and sign a PPA with a record-low tariff for solar power. We are working to secure long-term energy supply and reinforce solar power’s integral role in meeting current and future energy needs. Combined with key technological advances, the Al Dhafra Solar PV project will have a significant impact on diversifying the approach to our current electricity supply, and drive our strategic plan to further contribute towards the sector’s transformation in water and electricity production, as we develop a low-carbon grid in the UAE.”

“We are very proud to be awarded the largest solar project in the world at Al Dhafra. This success reflects the quality of our competitive bid submitted to EWEC in Abu Dhabi, in partnership with Jinko Power.

After the Mohammed bin Rashid Al Maktoum Solar Park 1 GWp Phase 3 with DEWA and Masdar as partners, and the implication in the built of the Hatta hydroelectric with storage power plant, near Dubai, this new ambitious project represents a major step forward in EDF group’s renewable energies development in the UAE. These solar projects, along with the Dumat Al Jandal 400 MW wind farm under construction in Saudi Arabia, clearly demonstrate our commitment to actively participate to the energy transition of the Middle East. The region with its great ambitions in low carbon energies is strategic for EDF. Al Dhafra new project greatly contributes to meet the EDF Group’s CAP 2030 strategy, which aims to double its renewable installed energy capacity from 2015 to 2030 worldwide to 50 GW nets.”