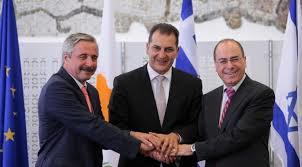 Israel’s Energy and Water Minister Silvan Shalom has requested that Greece take part in the construction of the East Med Pipeline project, during a meeting with his Greek counterpart, Environment, Energy & Climate Change Minister Yiannis Maniatis.

The gas pipeline project, involving Italian company Edison, a member of French corporate group EDF, will run from offshore deposits in the eastern Mediterranean to Cyprus, Crete, west Greece, the Peloponnese and Epirus, northwest Greece, before eventually connecting with the Greek-Italian IGI pipeline. The pipeline is intended to carry gas from Israeli deposits towards Europe.

Commenting on the developing collaboration between Greece, Cyprus and Israel on energy matters, the Greek minister noted that “a new chapter is beginning in the energy sector’s wider region.”

Maniatis, who spoke about the partnership during a visit to Rome, where he attended a high-level energy event on the strategic importance of European-Mediterranean gas and electricity collaboration for energy security, said he held discussions with his Shalom, Cypriot counterpart Giorgos Lakkotrypis, and current European Commissioner for Energy Union Maros Sefcovic.

“This new pipeline will ensure a new supply source, this being the Israeli and Cypriot deposits,” Maniatis remarked.

The Greek minister said the project’s team is interested in the Italian government’s involvement. Maniatis described the pipeline project and collaboration as being “the best thing that we have achieved in this extremely significant sector over the past five years.”

Maniatis noted that Greece is interested in playing the “role of ambassador of our wider region’s countries, through the European Union.”

The pipeline project is expected to trasnsmit between eight billion and ten billion cubic meters of natural gas per year.