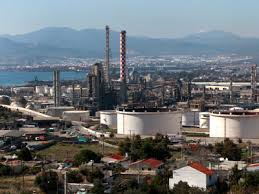 An interest by Iran’s Tadbir Energy Development Group to acquire a stake in ELPE (Hellenic Petroleeum), already discussed between Greek and Iranian government officials without any further progress, has been reiterated by Iranian officials, Iranian state media has reported.

The Greek state, which controls 35.5 percent of ELPE, has neither indicated any interest in such a development nor ruled it out.

Iranian government and oil officials have also slightly increased the level of an outstanding amount expected from ELPE (Hellenic Petroleum) for a sum owed to NIOC, the state-run National Iranian Oil Company, while some reservations have been expressed over the prospects of a recent crude supply deal reached between the two sides, Iranian state media noted.

According to Iranian media reports, Iranian officials put the outstanding amount owed by ELPE to 755 million dollars (approximately 680 million euros), up slightly from 650 million euros, based on a figure provided by an ELPE official.

The outstanding amount had resulted from banking restictions caused by the now-lifted western-imposed sanctions on Iran.

According to the ELPE official, the latter amount was agreed on when the two sides recently signed a Memorandum of Understanding (MOU), relaunching trade following the end of sanctions on Iran.

ELPE has already provided a first installment of 100 million euros, as had been agreed to by the two sides, while any difficulties that may be confronted by the Iranian company in receiving payments should be linked to lingering banking issues in Iran, following the sanctions, the ELPE official contended. ELPE cannot be held responsible should this be the case, the company official added.

According to the MOU, ELPE’s repayment to NIOC will be made over a four-year period through installments, supply of petroleum products, such as fuel and diesel, as well as engineering services to be provided by Asprofos, an ELPE subsidiary firm.

The initial overall enthusiasm generated by the recent agreement signed between ELPE and NIOC was somewhat dampened by the reservations expressed by NIOC managing director Roknodin Javadi as to whether the agreement can be entirely carried out.

Although a first shipload of Iranian crude ordered by ELPE is expected to arrive soon in Greece, Javadi, in comments to Iranian state media, noted: “We need to see how ELPE will respond to previous obligations before we can proceed with any further dealings.”