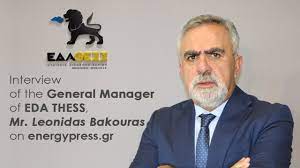 The main features of EDA THESS’ development program are the increased penetration of natural gas by the network’s expansion and the implementation of reduced tariffs for consumers combined with increased returns for the shareholders, as referred by the General Manager of the Company, Leonidas Bakouras, in his interview on energypress.

(See the full interview with Mr. Bakouras: Interview of the General Manager of EDA THESS, Mr. Leonidas Bakouras, on energypress.gr)

The reduction of gas distribution tariffs for domestic and industrial consumers is a “result” of the Company’s strategy, with the main pillar being the design for high quality network construction, which is based on techno-economic criteria of efficiency.

It is no coincidence that, in the recent period due to tariff reductions, 20 new energy-intensive industries and large consumers have signed connection contracts to the natural gas network.

At the same time, the investment program of the Company, as approved by the competent Authority for the period 2021-2025, is in progress, in light of the great expectations deriving from the extremely positive results of 2020.

“We have a large Program which was approved at the end of December by the Authority for the period 2021-2025 and implementation of investments has already started in January”, said Mr. Leonidas Bakouras, pointing out that for 2020, 23,000 new connections were acquired, distributed volumes were increased by 10% compared to the previous year of 2019 and natural gas penetration reached 64% in population.

The General Manager of EDA THESS made special reference to CNG technology, which has a dual role, both for the safe and uninterrupted operation of the distribution network in case of any malfunction, and for the natural gas distribution in remote areas. According to him, the Company has supplied new areas with CNG technology, a successful model since it managed to supply even the most remote areas with natural gas.

Referring to the positive financial results of the Company, the distribution of 20 million euros in dividends to the shareholders is expected, and as Leonidas Bakouras characteristically stated: “We achieve return on equity (ROE) of 7.2%, a ratio that showed a four-year high. We are on an upward trajectory, as shareholders are satisfied, consumers are satisfied (since distribution tariffs are reduced), and employees are satisfied. A triptych that contributes to the development of our country, offering a healthy working environment and added value to the place”.