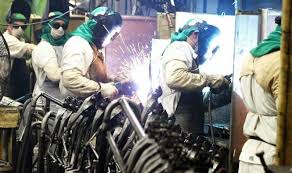 The ministry is currently examining ways for energy cost reductions to benefit both households and enterprises, especially energy-intensive producers, in exchange for the creation of jobs by the latter, it was announced following the meeting.

“For the first time in recent years, we feel that a definite political willingness exists for a solution to the industrial sector’s high energy-cost problem,” an official from EVIKEN, the Association of Industrial Energy Consumers, told energypress last night.

During the meeting, EVIKEN officials assured Lafazanis that if the energy-cost issue is resolved then both high and medium voltage industrial plants will be prepared to increase the amount of work shifts and production levels, meaning new jobs will be created.

According to sources, an agreement was reached at the meeting for energy costs to be reduced, which would boost local industry’s level of competitiveness, before specific proposals are made by the industrial sector for increased productivity and employment.

Conditions are currently ripe for electricity tariff reductions as PPC, the Public Power Corporation, has benefited considerably from lower production costs prompted by the fall in oil and natural gas prices, as well as from regulatory initiatives taken by RAE, the Regulatory Authority for Energy. These include lower Capacity Availability Ticket (CAT) costs, and the abolishment of the Variable Cost Recovery Mechanism (MAMK).

According to sources, a RAE proposal to reintroduce the Variable Cost Recovery Mechanism as a means of compensating thermal power stations for loss-incurring production activity forced on them for power contributions to the grid, was not delved into during the meeting.

The industrial sector has reacted strongly against the mechanism’s reinstatement, pointing out that its resulting cost will end up burdening electricity bills. It is believed the ministry’s wider strategy of aiming to lower electricity costs will not offer fertile ground for the mechanism’s return.