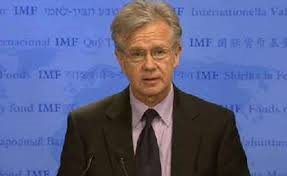 Less than two weeks after the newly elected government presented its agenda of policies in Greek Parliament, the International Monetary Fund has already reacted against the leftist Syriza-led adminstration’s declared intention of cancelling the privatization of IPTO, Greece’s power grid operator, and the part-privatization of PPC, the Public Power Corporation.

Well informed sources closely associated with the IMF, part of the troika of creditors involved in Greece’s bail-out agreement, contend that the fund is highly unlikely to endorse the cancellation of any privatization plans, including in the energy sector. The IMF has expressed its disapproval.

Although he did not go into details, IMF spokesman Gerry Rice, speaking at a news conference in Washingtion yesterday, noted that a future model of cooperation with Greece “is being discussed.” He added that “any flexibility should be considered on the basis of concrete proposals.”

Rice also noted that the “IMF is currently engaged in talks with the government so as to better understand its plans and priorities.”

The European Commission is also troubled by the developments. For the time being, it has refrained from making any comments on the newly elected Greek administration’s energy policy, opting instead to await the conclusion of negotiations concering the country’s loan agreement with creditors.

Once talks do begin, the issue of liberalizing Greece’s lignite sources, currently exclusively controlled by PPC, is also sure to be discussed.

In the past, the EU had called for 40 percent of the country’s lignite production to be transferred to the private sector. Last summer, the European Court had ruled against PPC for its exclusive control of Greece’s lignite sources, which prompted the previous administration to launch a part-privatization effort for PPC. It entailed establishing a new company representing 30 percent of PPC, locally dubbed “Little PPC”, which would then be sold.