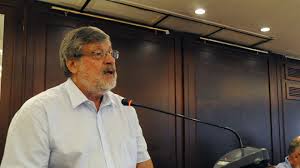 Syriza MP Apostolos Alexopoulos, head coordinator of the leftist party’s policies concerning energy, environment and climate change, has noted, in an article, that the party, currently ahead in polls ahead of Sunday’s snap elections, plans to disrupt international tenders for hydrocarbon exploration and exploitation of three overland blocks in western Greece as well as twenty offshore blocks in the Ionian Sea, western Greece, and south of Crete.

The declaration by Alexopoulos, a professor of geology and geoenvironmental studies at the University of Athens, carries particular interest as the deadline for bids concerning the three overland tenders, in Arta, Preveza, and northwest Peloponnese, expires on February 6, shortly after the January 25 elections. Bidders for the tender concerning the twenty offshore blocks in the Ionian Sea and south of Crete, launched in November, have until mid-May to make their offers, based on the current plan.

The Syriza MP, in his article published today, noted that, when elected to govern, his party will “stop the international tender in progress” and relaunch it after having established a Public Hydrocarbons Exploration and Exploitation Corporation that will be able to participate in the exploitation of any hydrocarbon deposits discovered. Also, the party plans to establish a state-controlled agency for supervision of drilling sites over security, environmental and worker-condition concerns, based on the Norwegian model, the Syriza MP noted.