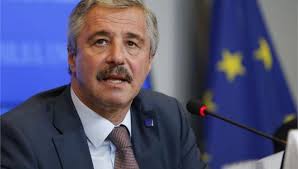 Environment, Energy & Climate Change Minister Yiannis Maniatis will travel to the USA this coming Sunday with a series of meetings with US government officials and potential investors on hydrocarbon exploration and exploitation matters dominating his agenda.

The Greek Minister, who will hold talks with officials in Washington and New York City, is scheduled to meet the US Secretary of Energy Ernest Moniz, the Under Secretary of State for Economic Growth, Energy, and the Environment Catherine Novelli, as well as a team of entrepreneurs and petroleum company officials, who will be presented Greece’s offshore and onshore blocks that have been included in upcoming international tenders.

During his visit, Maniatis will also present lectures on eastern Mediterranean energy prospects at the Center for Strategic and International Studies as well as NYC’s Columbia University.

The Greek Minister’s schedule will also include a meeting with Greek-American major investor George Sakellaris, an expert in energy efficiency and savings.

In comments ahead of his US visit, Maniatis pointed out that lower oil prices in the international market have not affected Greece’s effort to develop its hydrocarbon sector. “Interest is being maintained unabated and just as intensely. These are long-term investments so they are not being influenced by short-term price changes,” Maniatis remarked. “The long-term planning by companies indicates that prices will increase.”

The Greek minister underlined that Greece has made clear it is not interested in shale gas development, believed to be environmentally hazardous, and will not grant any permits even if investors take initiatives.

Earlier today, Maniatis told reporters that Greece was among the countries that pushed for the most ambitious renewable energy source (RES) objectives for 2030 at last week’s EU summit.

Tomorrow, the Greek minister will visit port-city Patras, western Greece, to inform local authorities on a hydrocarbon exploration and exploitation agreement signed for the Gulf of Patras.