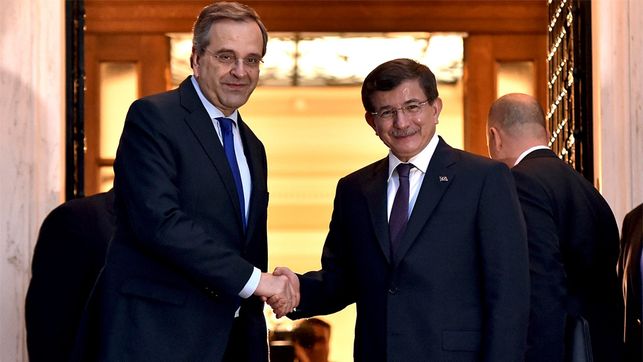 The third Greek-Turkish High-Level Cooperation Council ended on Saturday with a joint statement pledging goodwill and the intention for closer bilateral cooperation in trade, tourism and energy, as well as in curbing illegal immigration. However, both Prime Minister Antonis Samaras and his visiting Turkish counterpart Ahmet Davutoglu acknowledged that the two sides disagreed on key issues such as the Cyprus problem.

As Kathimerini says, the statement noted that both sides “acknowledge the basic role of mutual respect, trust, international law and good neighborly relations.” But in comments at Saturday’s business forum, Samaras conceded that the aim was to boost cooperation “in areas of low politics.”

On the Cyprus issue, Samaras said Athens backed United Nations-mediated negotiations aimed at reunifying the island and a decision by Cyprus President Nicos Anastasiades to pull out of the talks, a move prompted by Turkey’s violation of Cyprus’s Exclusive Economic Zone.

Davutoglu, for his part, noted that the two sides differed on the Cyprus issue but suggested there were signs of convergence. A Cyprus solution would be a boon for both Greece and Turkey, he said. “We hope the Cyprus issue is solved so cooperation in the energy sector can increase,” Davutoglu said, describing Turkey as a gateway to Asia and Greece as a gateway to Europe.

The Turkish premier added that Ankara backs the return of a Parthenon sculpture sent by the British Museum on loan to Russia. Samaras, meanwhile, reiterated Greece’s support for Turkey’s accession to the European Union provided it fulfills entry criteria.