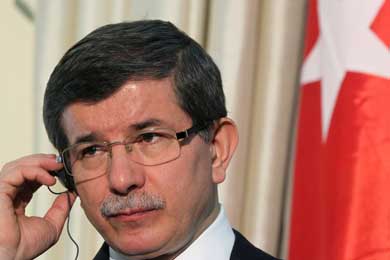 Prime Minister Antonis Samaras is to receive his Turkish counterpart Ahmet Davutoglu in Athens on December 5 and 6 when the two are to co-chair the third session of the Greek-Turkish High-Level Cooperation Council, the Foreign Ministry said on Monday following several days of rising tensions in the Eastern Mediterranean.

The announcement came just two days after Greek, Cypriot and Egyptian leaders agreed to cooperate in demarcating their exclusive economic zones at a summit in Cairo. The pact sparked a terse response from Ankara, which said the Turkish seismic vessel Barbaros would remain in Cyprus’s EEZ despite condemnation of its presence there by Greek, Cypriot, Egyptian and Israeli authorities. Also, Turkey’s naval commander said he has been ordered to implement new rules of engagement in the Eastern Mediterranean if Turkish vessels encounter Greek, Cypriot, Egyptian or Israeli ships, fueling fears of tensions escalating.

The summit in Athens was proposed by the Greek side in a bid to reassure Ankara that the Cairo pact is not a move against Turkey, sources said on Monday. Although the diplomatic summit in Athens had been on the cards, a firm date had yet to be set.

The groundwork for the summit is to be done by Foreign Minister Evangelos Venizelos who is to travel to Ankara on November 29.

On Wednesday Foreign Ministry general secretary Anastasios Mitsialis is to receive his peers from Cyprus and Israel in Athens.